Get ready for nine innings (or 30 minutes) of the greatest sports team ever — the New York Yankees. Hear about their modest beginnings, their best players, and the fate of Yankee Stadium, their home for 85 years.

(And I apologize in advance for this week’s echo-y sound…had some difficulty with one of my directional mics!) 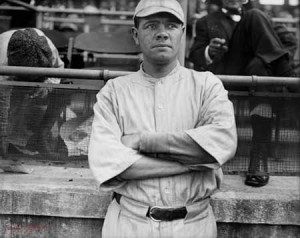 Ruth was alledgedly traded to the Yankees to finance Frazee’s musical No No Nanette. (Frazee’s name appears on the top of this poster.) Full disclosure — we dismiss this musical in the podcast, although musical enthusiasts might proclaim No No Nanette was very well worth it, if nothing more than for its signature song “Tea For Two.” Its first run ran over two years in 1925 and a 1971 revival did win several Tony Awards. 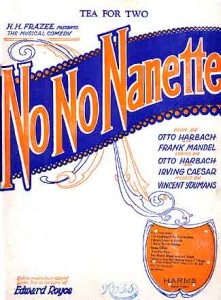 Babe at his retirement…. 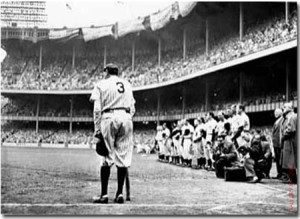 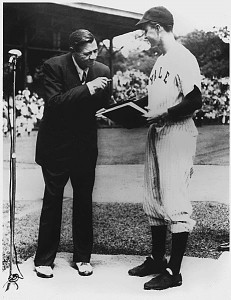 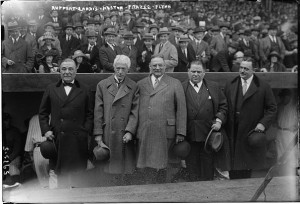 Yankee Stadium in its opening year 1923 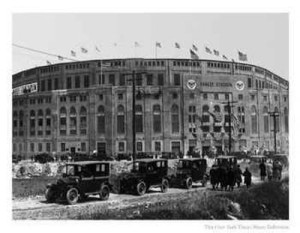 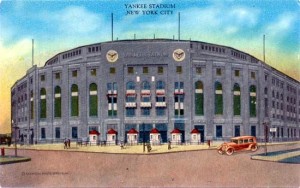 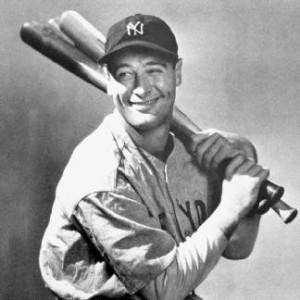 Joe Dimaggio with rival Ted Williams from the Red Sox. These two were almost traded with each other by their rival owners over an unfortunate night of cocktails. 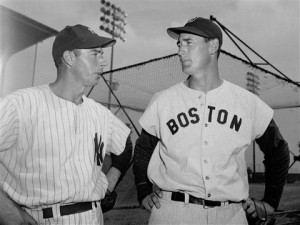 DiMaggio ‘the Yankee Clipper’ retired in 1951 and soon found himself in an ordinary life with an ordinary wife. 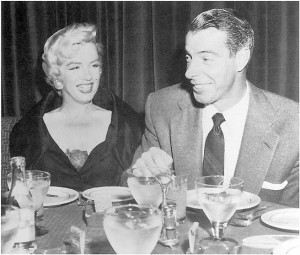 And who doesn’t love them some Casey Stengel, one of the best baseball managers who ever lived? 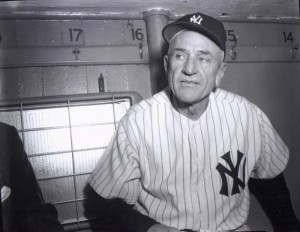 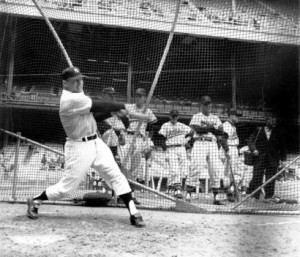 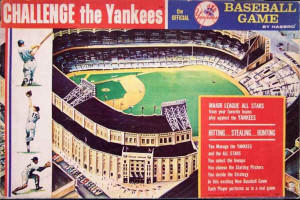 Billy Martin and the man who would repeatedly fire him, George Steinbrenner (Pic courtesy the New York Times) 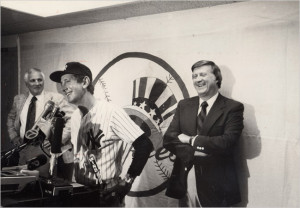 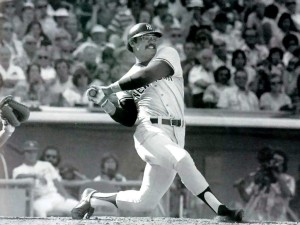 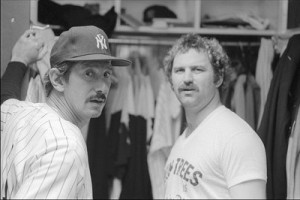 Monument Park at Yankee Stadium, honoring the greatest in baseball. Thank God they moved it out of center field…. 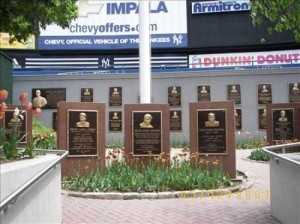 About our guest host:
A former journalist, Tanya Bielski-Braham is a writer, personal chef and full-time “foodie” who specializes in educating her clients on healthy, tasty diets and proper nutrition. She can be reached at skinnytomato@gmail.com. [Ed. note — A Yankee fan who’s an amazing cook!]

I loved your piece on the New York Yankees. Though Billy Crystal likes to claim to be Yankee fan #1, I am sorry. It is in my DNA.
My grandmother was a 2nd generation German immigrant who lived in the German ghetto of Baltimore at the end of the 19th century. The German ghetto was where Camden Yards is today. Occaisionally, she would play as a small girl, with that “bad boy” who lived above the “saloon” on the next block (George Heman Ruth).
My Dad’s family moved from Baltimore to New York City shortly before the stock market crash of 1929. So, Ruth and Gehrig were already world famous “Bronx Bombers”. Though my Dad never got to see the Babe play, he saw “the Pride of the Yankees”, Joe DiMaggio, Bill Dickey, Lefty Gomez, Tony Lazerri and the other greats of the 20’s/30’s/40’s.
I was born just outside of New York City on May 13, 1955. That was the day Mickey Mantle hit three home runs in one game. Mantle, Maris, Berra, Whitey Ford, Bobby Richardson and company were my Yankees.
My son was born during the World Series of 1978. His era is the Billy Martin and George (the “avenging angel”) Steinbrenner era. Munson, Nettles, Reggie, Catfish, Sparky and Goose, etc. are his Yankees.
Baseball created the baseball draft in 1957 to break up the Yankee’s dynasty. By the end of 1964 it worked. I remember waiting from 1965 through 1975 with no more Yankee pennants as I grew up. Apparently, God looked at the situation and decided it was wrong for him to have allowed the baseball draft. Therefore, he invented free agency and sent George Steinbrenner to earth as his “avenging angel”. And God said, “that is good.” The Yankee dynasty was restored!
Of course, from 1995 through 2002 we had the age of Joe Torre. And in that time we added the greatest 3rd baseman of all times (A-Rod) and shortstop (Derek Jeter) to add to 1b (Lou Gehrig). Of course, the outfield was always secure with Ruth, DiMaggio and Mantle. And our receiver corps of Dickey, Berra, Howard, Munson, Pasada, take your pick. . . But strangely, as my Dad always explained, it was “pitching” that made the Yankees great. After the 1920’s the Red Sox always had a better hitting teams than the Yanks. The Yanks won with better pitching. Though Whitey Ford is the sole Hall of Fame caliber starter, many all-star starters always filled the rotation. And, of course, Casey Stengel invented relief pitching. And look at the Yankee’s historical reliever corps: Ryan Duren, Papa Louis Arroyo, Sparky Lyle, Goose Gossage, Dave Righetti, Mariano Rivera. . .
The fifth generation Yankee “Clark” was born this year (an off year for Yankee pennants) just a little ways outside of Baltimore, Maryland (the home of the Babe).
I am glad Hank and Hal played the free agency market this year the way they did but still hung onto Jaba, Phil Hughes and Ian Kennedy. As my Dad said, “you win the pennant with pitching.”
Go Yankees in 2009!