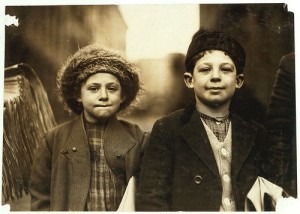 Is there an image of old New York that better captures the era than a scrappy young newsboy shouting EXTRA! on a street corner? Sadly the only newsies today are those glum middle-aged ladies and older men who pass out the AM New York free newspapers. They’re nothing like the newsies of old, full of singin’and dancin’! 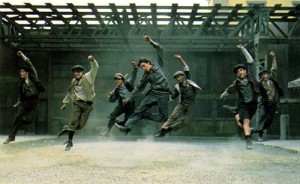 Obviously, the actual newsies employed by the major newspaper chains from the mid 19th century to the earliest 20th were the most noticable and sometimes the most tragic case of child labor in the city. We tend to forget the tragedy of these children due to their glamorized depictions in films — smartass, freckly-faced little urchins bellowing the day’s headlines. In fact, author Gerard Jones surmises “the sentimentalization of the plucky, happy newsboy in the comic strips of the day was largely a calculated effort to keep sentiment in the industry’s corner when reformers tried to extend the child labor laws in include newspaper sales.”

That cheesy Christian Bale Disney film, however, has as its core one of the most remarkable revolts ever organized by children — the Newsboy Strike of 1899.

In the era before child labor laws, boys (and quite occasionally, girls) as young as 6 or 7 would purchases bundles of newspapers and hawk them on street corners all over the city. Being a newsboy was a step up from selling matches door to door or tasks that required strength outside a child’s ability.

And there certainly was an iota of freedom and independence, but it was overshadowed by weather, fierce competition from other newsies (often leading to harassment and mugging), long hours, little respect and the state of the news that day.

And that was just the average day. Many kids were supporting their families with their nickels and dimes; just as many had no homes at all. A reformer in 1866 recalls, “I remember one cold night seeing some 10 or a dozen of the little homeless creatures piled together to keep each other warm beneath the stairway of The [New York] Sun office.”

And from 1872: “The newsboys constitute an important division of this army of homeless children. They are ragged and dirty. Some have no coats, no shoes and no hat.”

So naturally what a better group of people to be exploited by Joseph Pulitzer and William Randolph Hearst! The major newspapers needed the cheap labor to distribute their papers, and all publishers were guilty of it, but especially the city’s two most fiercely competative papers, Pulitzer’s New York World and Hearst’s New York Journal.

Wars sell papers, and when the 1898 Spanish-American War rolled around, circulations blossomed and distributors raised their costs to newsies to increase the profits, claiming the newsboys would be covered in their extra sales to ravenous buyers.

The war eventually subsided, but Hearst and Pulitzer left their prices as is. No longer able to survive, the newsies took an extraordinary step of organizing and waging a massive strike in July 1899. An emulation of earlier, smaller newspaper strikes, except this one virtually slowed the newspaper publication business to a halt.

In all, almost 5,000 boys went on strike for a week, demanding fair pay and compensation. Many of those days involved thousands of angry boys en masse upon the Brooklyn Bridge, not only inconveniencing the publishing world but the entire city. A mass of strikers met to air their grievances on July 24 as the former Irving Hall at 211 Broome Street.

Now although I said earlier that the ‘real’ newsboys were nothing like their movie counterparts, forget that as you meet the leader and spokesman for the newsboys strike — the enigmatic Kid Blink.

A lad of about 13 or 14, Kid Blink won his nickname due his primary fashion accessory — an eye-patch. At one point he was arrested for disorderly conduct, but released and hit the streets again with “renewed bitterness.”

“”Dis is de time when we’se got to stick together like glue.” His quotes are preserved in papers like the New York Tribune with accented spelling intact. No respectable newspaper would ever demean a subject like this today, but back in the day, journalism frequently tried to be ‘cute’.

Other newsies with colorful nicknames quoted in the papers included Barney Peanuts, Jim Gaiety, Crutch Morris, and Racetrack Higgins. Hmmm, actually its not surprising at all to see where the modern pop-culture depiction of the newsie came from at all.

The boys had the last laugh. The strike was called off when the newspapers agreed to take back unsold copies of all papers (although they still didn’t lower prices). The achievements of Kid Blink and the others would be built upon in coming years with tight laws regulating child labor.

And I wrap up with this rather extraordinary anecdote from a New York Times article, dated July 22th, 1899:

“Spasmodic attacks on so-called “scabs” were made during the day, notably in proximity to The World and Journal offices. The few weary-looking women who sell newspapers on Park Row and at the entrance to Brooklyn Bridge apparently are not participating in the strike, for they offered all the evening papers for sale, as usual. They passed unmolested through the lines of strikers, and, indeed, mingled with the boys and offered the barred papers for sale.

“This was noticed by a passerby, whose inquisitiveness gave him a wholly unexpected insight into the chivalry that evidently enters into the make-up of the newsboys. He inquired of one of them why a woman was calling extra Worlds and Journals while none of the boys was selling them.

Note on the photos: most of these are public domain and are pre-1900. I fully disclose that a couple of them may be of newsboys from Chicago or Philadelphia, but honestly, could I say no to those faces?

6 replies on “Extra! Newsies strike! Mobs on the Brooklyn Bridge!”

Loved this post. I wrote my senior capstone paper as a history major in college on the newsboys strike (it was a comparison between the newsboys strike and the trolley strike in the summer of 1899), and have never had more fun rummaging through rolls of microfiche as I did when I was doing my research for it. Such a fascinating snippet in history! Anyway, thanks!

Y’all Rock my socks. Within 24 hours of first getting my Ipod I had all episodes loaded. I now love my job, as I get to listen to history whilst I do my previously mind-numbing data entry.
And to top it off, an article on the Newsies strike! Rock on. While I am a *cough*diehard*cough* fan of the film Newsies, I also love looking at the strike historically. But don’t knock the movie too much – it got me into NYC in the first place. 😉

Love ya all the way from Alaska!

I got so much information from your website for my NHD topic, who knew just how fascinating this topic could be. Thanks for the interview!