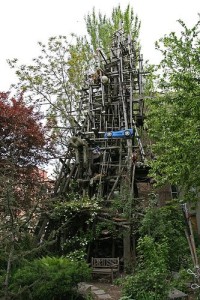 The East Village is loaded with great buildings, famous homes and pieces of New York’s history that reflect its ethnic diversity. But my favorite landmark has always been the Toy of Towers.

The corner of Avenue B and Sixth Street has looked almost the same as it did when I moved to Manhattan in the early 90s. The same, however, cannot be said of the East Village in general. Although trendy bars and restaurants had begun infiltrating the neighborhood then, it was only modestly gentrified. The East Village still had squatters, “Rent” seemed fresh and different, and ‘Seinfeld’ could still make jokes about Kramer getting lost there, as it if were a different world.

The Eiffel Tower of the East Village was always the peculiar found-art sculpture at the 6th Street Community Garden, a 65-foot tower of toys created by Eddie Boros, who lived a block away for most of his life. The garden opened in 1983, and Boros began building the massive homage to discarded toys a couple years afterwards.

The tower was precarious like the East Village itself, made of junk Boros found around the area and attached in various, sometimes tenuous ways. Dirty toys dangled like hanging fruit; one frequently expected that a teddy bear might fall to its death with a prevailing wind.

Although at first not a neighborhood favorite, it quickly became a beloved fixture. However Boros could only grow the monument so high, and when he died last year, he said he didn’t care if it were preserved or not.

This week, the Parks Department will slowly begin the process of tearing the Tower of Toys down. There was a memorial to the tower on Sunday.

Okay, so maybe it did look a little horrifically dirty. And maybe it would have even collapse at some point. Maybe preserving it was even a little beside the point. But anybody looking for a symbol to the changing character of the city need look no further

2 replies on “The Eiffel Tower of the East Village: R.I.P.”

A city without a changing character is a dead city.

This was my uncles tower. Thank you for this