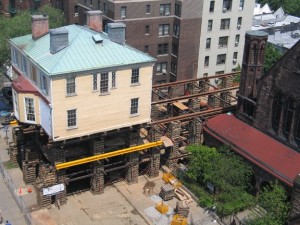 The Hamilton Grange National Monument is finally on the move! The home of Alexander Hamilton, built in 1802 and inhabited by the Founding Father for all of two years before his fateful duel with Aaron Burr, is being slowly lifted from its cramped, ingracious little spot next to St. Luke’s Episcopal Church.

As you can see from the website, the house had to actually be lifted over part of the church that had been built blocking the Grange front porch. Once at the proper height, the entire home was moved into Convent Avenue where it will slowly be lowered. On June 7th, it will be moved to its new digs at St. Nicolas Park, where it will be crowded by nothing but shrubs, picnic tables and trees.

What the Grange used to look like and where it was situated;

What the scene at the Grange was like a few months ago: 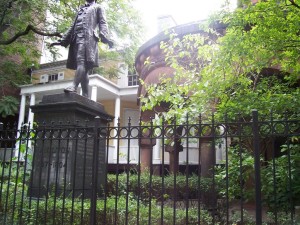 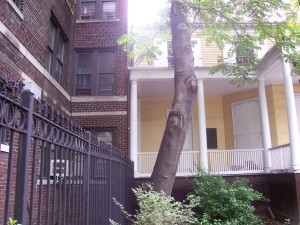 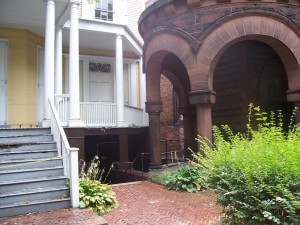 And here’s the graphic of what the new Hamilton Grange arrangement will finally look like, courtesy the National Park Service: 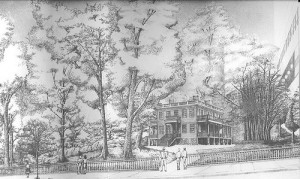 Obviously they will have to rebuild the side porches, the original entrance and other features that were stripped off when the house was moved next to St. Luke’s in 1889.

I highly recommend a trip up to the neighborhood of Hamilton Heights to check out this very unusual sight. You may not see a national monument hoisted up into the air for quite some time!

2 replies on “Hamilton Grange: Movin’ on up!”

I just want to say thank you for all the lovely podcasts. You guys are amazing. Keep up the good work. Greetings from The Netherlands.

An ancestor was the caretaker for Hamilton Grange. They lived on the property during the winter months. I always enjoyed hearing stories about how my mother and her 2 brothers would play on the grounds in the early 1900’s.