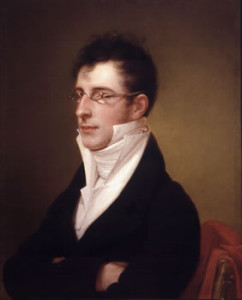 What if your best known accomplishment in this world was the fact that you posed for a well-regarded American masterpiece by your more talented older brother? Welcome to the world of Rubens Peale!

Philadelphians and American art lovers in general should be quite familiar with Rubens’ father Charles Wilson Peale, one of early America’s pre-eminent painters, portraitist to Washington and Jefferson, and patron of what would become the Philadelphia Museum. Peales museum for Philly, opened in 1786, is not only one of this country’s most important natural history institutions, it set the stage for pioneering museums across the country.

Peale graced his children with some truly loaded first names — Raphaelle, Rembrandt, Titian and of course Rubens. And they all attempted to follow in their father’s footsteps, both as painters and as curators of their own museums.

Raphaelle tried to open one in Charleston. Rembrandt set one up in Baltimore (unfortunately timed for the War of 1812). Baby brother Titian took the reins in Philadelphia and became the family’s most prolific naturalist.

Rubens, at first more interested in the sciences than the arts, operated the Philadelphia museum before coming to New York City in 1825 to set up his version of his father’s dream. The address for the Peale Museum of New York City was 252 Broadway (across from City Hall on the west side) in a building then known as the Parthenon.

The museum opened on October 26, 1825, to monopolize on a huge city celebration occurring that day: the opening of the Eric Canal. By 1840, Peale would change the name to the New York Museum of Natural History and Science.

Rubens museum would have had much the same makeup as the one in Philadelphia : great displays of stuffed animals in natural settings, display cases of butterflies and insects, postulations of pre-Darwinian scientific theories laid out over several rooms and supported with lectures and even theatrical productions. One book refers to Rubens as a “popularizer of scientific discoveries and a manager of theatrical attractions.”

In 1826, Rubens imported two mummies from Cairo for display; after 16 days of presenting the draped bodies, he presented for the interest of the “scientific and the curious” the unwrapping the age-old corpses in the museum lecture room.

His museum also featured fine arts and historical portraits, some by his own family members, others by respected painters as Bass Otis.

Rubens was sensitive to some of the cheap ploys of the Philadelphia Museum (live animals, displays of human deformities) and tried to keep his New York museum a dignified affair, although today we would find its use of waxworks and flashy lectures rather silly. 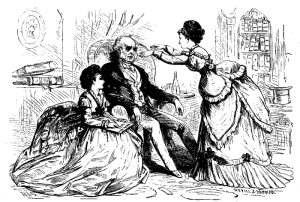 Above: an illustration entitled ‘Mesmerism on Wall Street’

Rubens adherence to the scientific led him into some unusual directions. He became mesmerized, if you will, by the theories of Fredrich Anton Mesmer, who believed a magnetic fluid in the body controlled the personality. A precursor to hypnotism and later the intellectual embrace of clairvoyance, mesmerism was such a popular distraction that Rubens placed a New York newspaper advertisement on February 8, 1841, claiming “a demonstration on the principle of animal magnetism” would be presented at his museum.

“The time is not far off when it will be said where is the person that doubts its existence” he later said in a letter to his brother Remington.

Unfortunately he could not quite predict the financial disaster that was the Panic of 1837 which sent his museum into debt, later unable to keep up with the flamboyant American Museum just opened down on Broadway and Ann Street by showman P.T. Barnum. Rubens had to eventually sell his entire collection — to Barnum — in 1843. Included in the sale: one of the surviving mummies that had been brought from Cairo.

Almost as a slap in the face, Barnum actually kept Peales’ museum open under the original name as a faux rival to the much more popular American Museum on the other side of City Hall. Eventually its contents were absorbed in the bigger museum

Rubens retired after the failure of the museum, turning first to his love of taxidermy then to a dalliance in painting. He did achieve a certain amount of renown for his excellent still lifes, and when he died in 1865, he had literally just finished the aptly named work The Artist’s Last Birthday.

Rubens’ earnest collection set the stage for the world-class museums that we have in our city today. However, art historians probably know him best as the subject of his brother Rembrandt’s portrait Rubens Peale With Geranium (below). 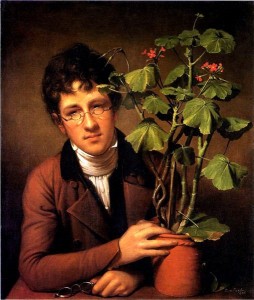