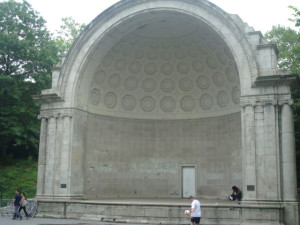 Don’t accept a gift unless you’re pretty sure you’re going to use it.

That’s the lesson the city learned after the fiasco involving the jazz-age Naumburg bandshell, which sits proud and empty overlooking the Central Park mall thanks to some tenacious descendants of the man who donated it, Elkan Naumburg.

Proper sorts of concerts were always envisioned for this area of the park. Given to the notion that a beautiful park promoted moral and intellectual sanctity, Vaux and Olmstead believed “the effect of good music in the park is to aid the mind in freeing itself from the irritating effect of urban conditions.”

The area where the bandshell stands today was coined the Concert Ground in their early plans, and a cast-iron shell designed by Jacob Wrey Mould (Vaux’s collaborator on both the Metropolitan Museum of Art and the Natural History Museum) was erected west of today’s bandshell and surrounded with fountains, benches and metal bird cages (!), all the better to enjoy the proper music of the day.

As the park attracted more people outside the upper classes, such elegant surroundings seemed out of place. Enter music lover, banker and philanthropist Elkan Naumburg, who stepped in with a healthy donation of $100,000 to build a dynamic new bandshell. 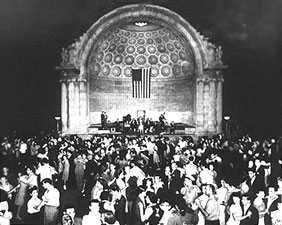 Naumburg’s name had been associated with classical music since 1905 with the debut of Naumburg Orchestral Concerts throughout the city. But by the time the new bandshell was built in 1923 (and designed by his nephew) this little slice of Romanesque architecture made way to host other kinds of music, namely jazz and big band.

Imagine strolling down Literary Walk or along the lake with the air filled with the jaunty chords of Duke Ellington and Irving Berlin. Space in front of the bandshell was reserved for dancing, partners sweeping across the asphalt under the full moon. (The picture above is from 1942.) Keeping it in the family, Elkan’s son Walter hosted concerts by the Naumburg Orchestra.

The bandshell also hosted speeches and protests throughout the years, hosting everybody from Martin Luther King Jr. to Fidel Castro. In the 60s and 70s, the bandshell also played host to rock artists like the Grateful Dead and the Jefferson Airplane (below). 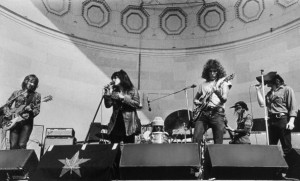 But the music eventually went elsewhere (more often, just up the hill to Rumsey Playfield) and by the 1980s the bandshell took on a new use — a haven for the homeless. In the comprehensive 1985 survey by the Central Park Conservancy, it was recommended that the bandshell, never part of the original plan, be demolished or at least moved. Everyone generally agreed that it had become an outdated eyesore.

Everyone, that is, but the Naumberg family. They took the city to court and, in a landmark 1993 decision by the court, successfully blocked the demolition. The court determined that “its administrative code prohibited destruction of a gift” and that all gifts “shall be forever properly protected.” Essentially, because the city agreed to accept the bandshell as a gift, it couldn’t then turn around and destroy it.

Since then, the city has “make the best of a bad situation” (in then-parks commissioner Betsy Gotbaum’s words) and kept the bandshell in business with regular summer concerts and dance performances. It’s the gift that keeps on giving. 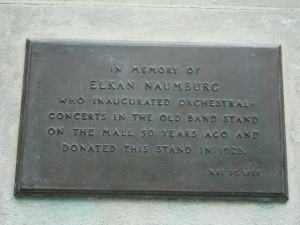 5 replies on “Naumburg’s Bandshell: a gift that won’t go away”

Is moving it still an option, or would that be prohibitively expensive? Of course that would still leave the question of where to move it, as the dump is apparently off-limits.

Why in the world would you want to demolish such an iconic NY monument? When I finally visit NYC one day, i want to get on this stage and perform a monologue!

I saw many concerts at the band shell. I loved Goldman’s Band!

I saw many concerts at the bandshell. I loved Goldman’s Band They played there often

I was at the Naumburg’s Bandshell after the 1970 Earth Day march, and I recall hearing Pete Seeger and, I think, Jefferson Airplane. Does anyone know of images of this event? Thank you!!