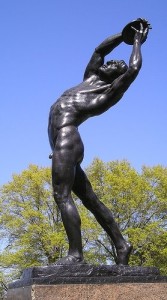 Has an internationally famous monument ever had to endure such grave indignities as the Discus Thrower of Randall’s Island? Scandal!

Nothing proclaims the revitalization of Randall’s Island more than this distinctive, classically inspired statue by Greek sculptor Kostas Dimitriadis. The Discus Thrower is the most graphic symbol of the changing island and a hallmark of its sports past. However, almost since its creation, Dimitria’s work has been constantly on the move and was even, at some point, ravaged and dismembered.

Dimitria created this award-winning discobolus for the 1924 Olympic Games in Paris. Two years later, businessman Ery Kehaya donated it to the Metropolitan Museum of Art as “an expression of gratitude from Greeks living in New York to the city that has given them opportunity.” The bronze was displayed behind the Museum, not in it, for ten years.

Finally, when the new stadium was opened on Randall’s Island in 1936, the Discus Thrower was installed in front of it, a natural fixture for a place soon to burst with Olympic superstars.

But respect for this Olympic icon faded in the 1960s. Badly rusted, the poor guy was riddled with graffitti, his discus was stolen, and part of his arm was broken off. Eventually, in 1970, the entire statue was placed into storage. 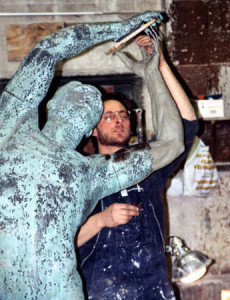 Almost thirty years passed before the island was in good enough shape, thanks to the Randalls Island Sports Foundation, to welcome the Discus Thrower back. But not before some delicate restoration to replace the missing limb. The statue was rededicated on July 21, 1999, in a ceremony that featured an actual discus thrower, and a pretty legendary one at that — Queens native Al Oerter, who won Olympic gold in the event in four consecutive games, a feat yet to be surpassed in any sport.

Later Mayor Bloomberg, who had worked with Oerter during the failed 2012 Olympic bid, turned the now-gleaming statue into a tribute when the athlete died in 2007. “From now on, when New Yorkers pass the iconic discus thrower statue on Randall’s Island, they should remember the life and contributions of Al.”

The Discus Thrower has a brother replica in Athens, Greece. He hasn’t moved from the entrance of Athens’ Panathinaiko Stadium since 1927.