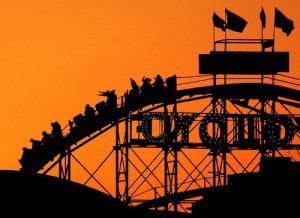 Astroland is once again closing for the final time at the end of this weekend, making way for Thor Equities to begin their new development of the area.

The park’s main attraction, the legendary Cyclone, isn’t going away however. A functioning roller-coaster since 1927 — and built on the spot of the world’s very first roller-coser — the Cyclone is actually owned by New York City parks department. Its been leased to Astroland since the park’s opening in 1975 and will return to the city’s hands with Astroland’s closure.

Less certain is the fate of cheesier rides such as haunted ride Dantes Inferno and the back-pain indusing Break Dancer.

This is a huge dent to the immediate future of Coney Island, but it isn’t the end. Deno’s Wonder Wheel park stays open through October and will be open as usual next year.

You can read official statement of Astroland’s closure at the great Coney Island blog Kinetic Carnival. And relive our podcasts on Coney Island — the golden age and the funspot in the 20th Century including a history of the Cyclone. 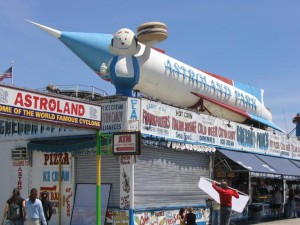 Unfortunately, this time the last time is almost certainly the FINAL time. Thor, and the various powers that be, definitely have no use for the lingering remains of a once modest state of the art playground that meant so much to us who were children when Astroland opened. Indeed, the entire city, as we knew it, is gradually being swept away and replaced with newer more ritzy projects. Of course, this is the nature of progress as it is with life’s birth and inevitable death. But that sort of rational philosophy is difficult to grasp by those of us who still live and continue to remember.

Thanks. You have a GREAT blog: Keep up the Good Work.

I made my dad from St. Louis go with me last year because we thought it would be the last year. He was really impressed with how close it was to the city, how much cheaper it was than Disneyland and how the beach provided a nice, easy alternative to the rides. Having read about it and seen pictures of it for years, he felt he was walking around a movie set. He was sad about the whole situation after having only been there once for a couple of hours.

Truly sad. Thank God the Cyclone will be around (at least for next year.)