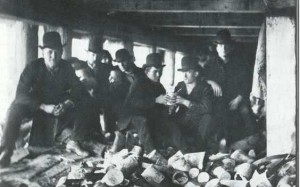 Above: Another local gang of the Lower East Side, the Shirt Tails of Corlear’s Hook, most likely fought with the Cherry Hill gang, the Batavia Street gang, or maybe even both (circa 1889 pic from courtesy of Irishinnyc)

We’re finally stepping away from the grime of the late 19th century, but not before giving a little shout-out to possibly one of my favorite gangs of the era, the Cherry Hill Gang.

Not much is known about them — street gangs don’t traditionally leave exhaustive archives about themselves — but current descriptions usually use one word to describe them : dandies.

Cherry Hill was the decrepit neighborhood near the waterfront in the Fourth Ward, lined with tenements as awful (and sometimes worse) as the ones in Five Points. Its resident mix of Jewish and Italian suffered the same conditions as those in other poor neighborhoods, and hard times dealt its share of saloons, prostitution, crime and ruffians.

An early variation of the gangs of Cherry Hill included young William ‘Boss’ Tweed as their leader. According to an early bio on Tweed, the Cherry Hills rivals were the boys on Henry Street, just three blocks away. According to author Denis Tilden Lynch, it was important to stay clean on your turf and spar on somebody elses:

“A gang, to survive, must be peaceful in its own neighborhood. Its petty offenses are invariably directed against peaceful citizens of distant streets. Piracy would never have been an honored profession if the black flag flew only in home waters.”

By the 1890s, the “roughs” of Cherry Hill had literally re-tailored themselves. To rob the rich, one must be able to mingle with them convincingly. So the Cherry Hill gang was known for their impeccable dress sense, their stolen funds apparently used to acquire elegant, dressy outfits of the day. Topping these foppish costumes were walking sticks tipped in metal to better thwack an unsuspecting victim.

The Bowery Boys of the 1850s and 1860s were also known as sharp dressers; however their dress sense reflected their well established reputation and political power. The Cherry Hills meanwhile dressed for success merely to infiltrate rich neighborhoods and rob unsuspecting gentlemen. And apparently to intimidate local rivals.

The primary rival of the Cherry Hill gang was the local Batavia Street gang. Batavia Street was a former street in the same area, “in the shadow of the Brooklyn Bridge” and apparently in one account was “the most [Charles] Dickensy street in New York.” (It’s also referred to in some accounts as Batavia Lane, but the Batavia Lane Gang doesn’t sound very menacing, does it?)

Like some Gilded Age variation of West Side Story, the Cherry Hill gang and the Batavia Street gang were set to meet on the dance floor of New Irving Hall (once located on 214 Broome Street). Lower East Side balls in the late 19th century were modeled after their upper class variations, but were far rowdier and certainly more fun.

The Cherry Hill gang were set to dazzle in their finest ensembles, certainly intending to steal the show (if not steal more material things in the process). The Batavias would not be outdone but were desperately broke. After the pawning of a stolen gold watch from Herman Segal’s jewelry shop failed to produce enough cash for fancy new threads, the jealous gang returned to the jewelry store and simply smashed the window in, running off with 44 gold rings “worth from $3 to $45 dollars apiece.

The Batavias were eventually captured — while trying on their newly bought suits, no less, on Division Street — and thrown in the Tombs. Apparently the Cherry Hill gang attended the ball as planned. They would eventually go on to influence the dress sense of other street gangs. New York has changed so drastically in the 110 years since the New Batavia ball, but it’s nice to see that the superficial love of fashion has never been altered.

You can read more about the Batavia’s foiled robbery in the The American Metropolis. The Tweed bio referenced above is called “Boss Tweed: The Story of a Grim Generation.”

Below: The Jacob Riis photograph of the alleyway at Gotham Court in Cherry Hill 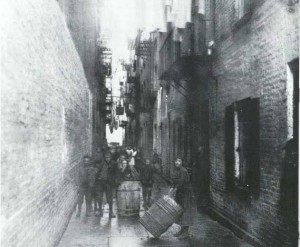