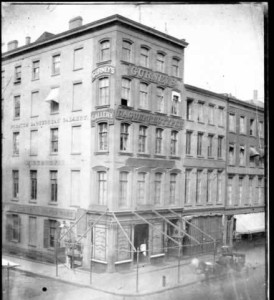 If all this talk of Jacob Riis has whet your appetite at all for some nostalgic images of Manhattan, you must check out the New York Historical Society‘s display of some really, really, really old photographs, the early work of photography pioneer Victor Prevost.

Provost’s early experiments in the 1850s with calotypes (negatives on wax) captured the images of buildings around his downtown Manhattan photo studio, located at Broadway and Bleeker. These primative captures are in some cases the only existing images of some of these long-gone buildings.

In Victor Prevost: Early Photographs of New York, the NYHS plans to exhibit 28 of these most early images, and even a few of the remaining negatives, including a most appropriate photo of the building above — Gurney’s Daguerrean Gallery.

Gurney’s was devoted to one of the first forms of photography — daguerreotypes. Jeremiah Gurney himself was a noted early photographer, opening a couple galleries along Broadway in the 1840s. As Gurney was busy capturing the faces and intimacies of New Yorkers, Prevost was outside documenting the growing cityscape.

Also included in the exhibit will be some images from the New York Crystal Palace, the exhibition hall build for the 1853 Exhibition that once stood where Bryant Park is today, a collection of inventions that was destroyed in a fire in 1858.

Below: one of Provost’s most well known photos from a 1862 series on the newly built Central Park (I don’t think any of these will be appearing in NYHS’s show.) You can look at more of these here. 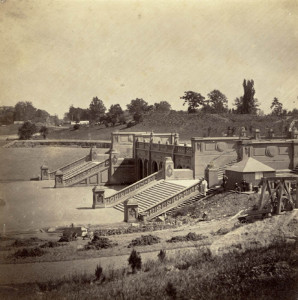 It’s great to be here in your blog! I’m eager to know the history of New York , and the old pictures are awesome. Keep up the good work!