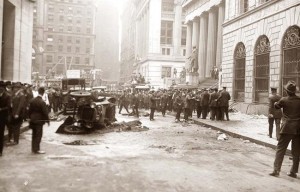 Eighty-eight years ago, in 1920, it would have practically been the same, sans the cell phones. So it’s particularly disturbing how easy it is to imagine the noontime scene on September 16, 1920. In fact, most of the surroundings — the Stock Exchange, the Sub-Treasury building (today’s Federal Hall), and most importantly J.P. Morgan’s headquarters on 23 Wall Street — are still very much active.

An unidentified man led a horse and carriage down the congested street, fighting to get past crowds, until it rested at the corner about 100 feet east of Broad. As the Trinity Church bells rang, the man dropped the reins and fled, never to be seen again.

One minute later, the wagon exploded with 100 pounds of dynamite, eradicating everything in its sphere, then sending dozens of iron slugs through the air to create a horrific scene of carnage.  I’ll let other sites outline some of the grimmer details, but by the end of the day, 38 people would be dead from the attack, many while sitting at their desks.  And over 400 more would be injured. 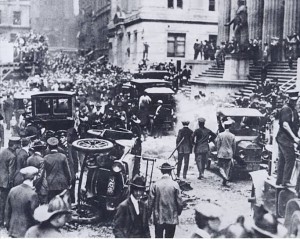 Believe it or not, evidence of this attack can easily be seen from the street today.  Morgan famously rejected repairs of his bank, preferring to leave the dents and pockmarks on the side of his building in a sign of defiance. With a little morbid imagination and some amateur CSI work, one can probably trace the trajectory of wall’s injuries to the very spot where the poor horse and wagon exploded.

Despite a federal investigation which led to dozens of arrests, in fact the culprits were never caught.  Largely assumed to be Italian anarchists, any evidence was unfortunately lost when, in an effort to appear unfazed, the city cleaned the street and kept Wall Street open for business the next day, even seeing a rally of thousands pour into the street that Friday.

I’ve just touched on the event, but there are several resources online that look into the potential perpetrators, the street scene and the tragic aftermath. 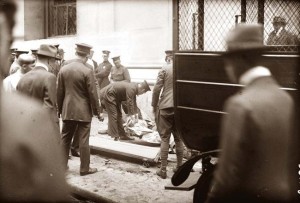