Not all Rockefeller Center Christmas trees are born alike. Once removed from their serene forest habitats, each winner of New York’s annual arboreal beauty pageant finds itself in a different set of circumstances, thanks to world circumstances and fashions of the day. The following trees deserve special commendation: 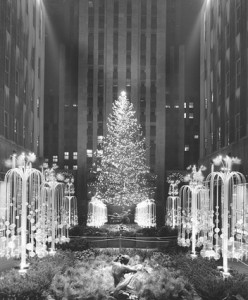 1931 The Original Tree By Although the first ‘official’ tree would get its launch in 1933, in a lavish lighting ceremony orchestrated by Rockefeller Center publicist Merle Crowell, nothing seems more heartfelt than the 50-foot tree planted in an excavation hole by construction workers, months before any building would even be completed

1934 The Singing Tree It was apparently in vogue at the time to install speakers inside Christmas tree to somehow give it the appearance ‘singing’. The White House Christmas tree tries it two years before, and Rockefeller Center follows suit. I’m sure nobody was fooled. If a tree can sing, what’s to stop it from getting up and walking around? (By the way, isn’t it a Christmas miracle that the tree has never fallen over into the skating rink?)

1936 The Twin Trees Speaking of skating, the rink below opens this year, and to honor what would soon be one of the most popular features of Rockefeller Center, organizers get two 70-foot trees. (They do the same thing in 1937 and 1938.) If you’re being technical — and let’s be technical, it’s the holidays! — at a combined 140 feet, that’s the largest amount of footage ever utilized for the annual display.

1941-1944 The Dark Trees The annual trees remain unlit throughout the war and are decorated with “unessential” materials, with all those twinkly lights and garland apparently donated to the war effort.

1949 The White Tree In what was certainly the most ridiculous, plastic-looking yet utterly fantastic tree ever created, a 76-foot Norway spruce is actually spray painted white to give it the appearance of looking covered with snow or else to publicly humiliate it for some unknown offense.

1951 The Televised Tree (above) Songstress Kate Smith turns on the lights in the first broadcast celebration of the Center’s annual tradition, setting the stage for this year’s ultimate celebrity appearance by the Jonas Brothers. (My 10-year-old niece told me to write that.)

1966 The Foreign Tree (below) For the first time, a handsome 64-foot specimen is brought in from Canada. Another country! This would never happen had George W. Bush been president! 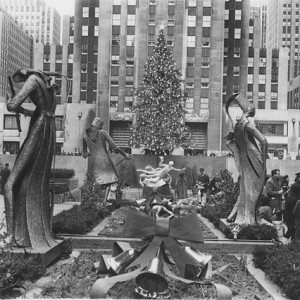 1971 The Zombie Tree The Balsam Fir at the center of this year’s celebration, already severed from its native forest and gussied up like a cheap Christmas harlot, has the unusual distinction of being mutilated, mulched and recycled for other purposes the very first time. The 1970s have arrived!

1980 The Daredevil Tree Something about the thick, brawny branches of this year’s 65-foot tree drew a man to attempt to climb to the top. The nimble climber was promptly arrested and security inevitably doubled after that.

1993 The Flamboyant Tree For the first time, the number of lights embracing the Christmas tree exceed 30,000, possibly making it the most energy-wasting tree up to this point. And they were proud of that back then! (The ‘green trees’ of the past two years look to reverse this unfortunate side effect of holiday cheer.)

1995 The Holy Tree This year’s selection isn’t just from any forest. The 75-foot Norway spruce used for this year’s ceremony was donated by a convent. Hallelujah!

1999 The Tallest Tree The monstrous creature towering over obviously frightened skaters this year chimes in at an astonishing 100 feet tall.

2004 The Blingy Tree The tree goes truly upscale when its topped for the first time with that hefty Swarovski crystal star, comprised of 25,000 crystals, making it the most decorated lady on Fifth Avenue.

2 replies on “The Best Rockefeller Center Christmas Trees EVER”

I was on the website looking for the first white christmas tree for “Rockefeller center. The reason I was doing this is because my mother’s (who is now 89) in-laws William and Anna Smith’s house in Middle Island,
Long Island New York, on the shore of Artist Lake.
I heard rumors that there was no white tree but my mother was a witness to this.

You forgot the 2001 tree- the lights were red, white and blue.