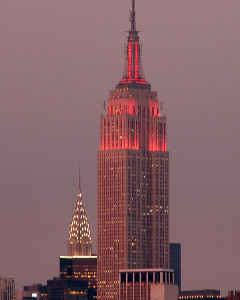 Yesterday the media reported the grim news that a woman committed suicide by leaping out a 39-story window of the Empire State Building. The woman was an employee in the building; however New York’s most recognizable symbol, and its 102 floors, has been the final destination for over 30 people since it opened its doors in 1931. (According to one source, 35 as of 2006. Make that 36, I guess.)

Why do people choose famous places to leap from? Is it simply to grab attention, to attach a sense of the iconic to your final moment? Are they hoping they get caught before leaping? The Empire State, destined to represent the city’s promise and pure ambition, has also been a magnet for morbid thoughts even during its construction.

A construction worker, laid off in a swath of Great Depression job cuts, jumped from the building before it was even completed. (He chose to go in a different direction : the elevator shaft.) In 1947, a 23 year old woman jumped from the building to hit a United Nations limousine, resulting in an extremely famous Life Magazine photograph. (Go ahead, look. It’s strangely serene.) In fact, there were a rash of suicide attempts from the observation deck in 1947, including one jumper who seriously injured a pedestrian walking in the street below.

According to a paper by the New York Academy of Medicine, midtown Manhattan has seen dozens of suicides over the years, particularly from non-residents of the city, combining fantasies of their own ends with those of the city’s grandeur. This has of course caused safety concerns for people on the ground — “They said the man landed on a van parked on 33d Street” says a New York Times account of one event in 1981 — to the extent that the Empire State Building has had ‘suicide fences’ on its observation deck for many years. (Since, no surprise, 1947.) 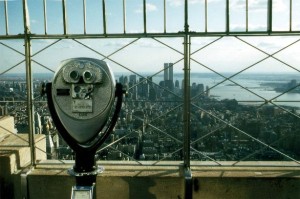 However, believe it or not, somebody did survive a leap from the Empire State Building. She just didn’t fall very far.

As the story goes, in 1979, a depressed woman Elvita Adams jumped from the 86th floor to end her life. Yet the wind gusts can be quite powerful that high up and, unfortunately for her, one powerful gust actually blew her back into the building one floor below, breaking her hip. She was apprehended before she could try again. (And really, if something that extraordinary happens, she might have wanted to reconsider it anyway.)

Of course, not everybody who attempts this horrible leap has a deathwish. Stunt aficionado Jeb Corliss was arrested in April 2006 when he tried to leap from the building wearing a parachute. Some of you may remember the heart stopping video of the man being apprehended from the other side of the fences. (A screenshot is below.)

Having just written all of that, I almost feel required to put information for the New York Suicide and Crisis Hotline. You may now return to enjoying the Empire State Building as the vibrant, living, joyous icon of the city. 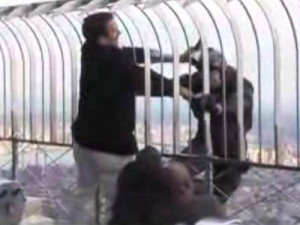 A few years ago back I ran over The Golden Gate Bridge. It is very easy to go over the rail there. Every hundred feet or so there was the phone number to the crisis hotline.

Youtube “The Bridge”. Full length documentary of suicides over the Golden Gate.

They have now put a suicide net under the golden gate.They say the count as far as jumpers is just under 3,000.But theres many more than that.Jumpers are not always seen.Especially the night jumpers.Nobody see’s them.The current that runs through that channel is wicked fast and the waters are shark infested.Sharks everywhere.A body ever surfacing again is’nt likely.

NPR did a great show years back about the history of suicides at Niagara Falls, too. Seems like any tall landmark is a magnet for jumpers.

Does the 30+ suicides in its history make the Empire State Building the most suicide-prone spot in the city, I wonder?

The Brooklyn Bridge has had many more jumpers — it’s over 40 years old, after all — but it’s only equivalent to a ten story jump and many survive, sometimes without a scratch: http://www.nydailynews.com/news/2008/06/03/2008-06-03_brooklyn_bridge_jumper_survives_without_-1.html

I think it’s because she made that response in 2009….. Hahahah Just my guess.

New York magazine had a great story last year about suicide tourism in NY. I believe the George Washington Bridge was the biggest hotspot. A couple hotels in midtown were also used. I think most of these people are looking for one huge, notable punctuation mark at the end of their lives.

Whatever floats their boats. Fact is, dude, I’ll croak, you’ll croak, all of U.S. will croak someday at sometime; then, we must face the King of the Universe, Jesus, to determine whether we achieve Heaven. So don’t get so caught-up in this passing earth you lose your immortal soul. PS I gave up my hard-won, black belt to fight for Heaven. Wotya gonna give up, brudda? God blessa youse -Fr. Sarducci, ol SNL.

By far the weirdest and cruelest suicide destination that I’ve ever heard of was the Carousel Center in Syracuse NY. Fewer than half a dozen have died this way, but it’s crazy to me that even more than one person, let alone five or six, would commit suicide only six stories up, landing in a spot populated mostly by small children. It’s almost like hanging yourself from the monkey bars at a playground.

Evelyn McHale is the name of the woman who jumped in 1947 and it is quite surreal how peaceful the image is.

She almost looks as if she’s just taking an afternoon nap, and before long, she’ll be up and about again. So, when you think of what she actually just did, how on earth she can appear so unaffected by it is truly mind-boggling.

My grandfather spent a couple of years in the States at the beginning of the 20th Century. On the ship’s manifest for his return journey to England is an entry regarding deaths on board during the voyage. Apparently one passenger committed suicide by throwing himself into New York harbour! Wonder why he paid all that money for an Atlantic crossing when he could have jumped from the Staten Island Ferry for free?

Here in north London we have Suicide Bridge on archway / Highgate – an area notorious for hauntings / phenomena – Stephen King wrote about this in his short story ‘Crouch End’ when he came here to visit his friend Peter Straub , who lived in Crouch End at that time …

NYU’s Bobst Library has also has its share of suicides by stressed-out students. The building was still going up when I attended school there. Recently, barriers have gone up to prevent any more suicides.

Fall Creek bridge at Cornell in Ithica NY has been a problem every Spring semester for years.

I am from Ithaca and know the bridge and of the suicides well. There are jumper nets installed now. Also cameras to film the jumpers.

About the person who jumped from the Empire State in 1947 and struck a pedestrian, my father, James Lambert, was involved in the incident. He had taken his nephew from California to the observation deck. Both were in military uniform. My father noticed a man acting strangely and reported it to a security guard. The guard did not take it seriously. A few minutes later man took off his overcoat, climbed over the parapet, and jumped. He struck a woman from Iowa who was visiting her sister in New York City. The woman was crippled for life, but because of my father’s warning, she received a considerable sum from the owners of the Empire State. My father received a Christmas card from her and her husband every year afterward until their deaths. Ironically, her husband, who was an engineer at the U. of Iowa, had designed the lightning rods on the Empire State.

I was the last person on the Empire State observation deck the night that lady jumped and lived in ’79. It was just before Christmas, with clear weather … but the wind was howling, and the temp was 8 below. My pals inside were yelling at me to come in, but I was totally mesmerized by the incredible view (while holding onto the bars for dear life … the wind was easily 50+mph and buffeting so stongly that I swear it might lift me up and over the side). As I finally came in and took the elevator down moments before closing time, I didn’ t notice the woman, but she jumped only minutes later.

The reason she survived is not only that the wind pushed her against the building, but that the window ledge was so wide … not to mention that there was a janitor in that very room swabbing the floor. He heard her moaning and opened the window and pulled her in to safety.

Strangely enough, the EXACT same thing happened to a man who jumped there some years earlier … high wind, pinned to ledge, cleaner in room, and pulled to safety. Amazing!

From those few who have survived the jump from the Golden Gate Bridge have reported to have felt regret just after they have jumped, realizing the reality of what they just did.