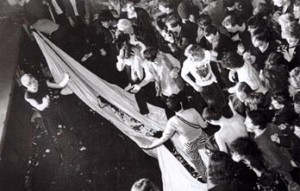 It may not have the historical cache of a Civil War draft riot, but Webster Hall has had its share of violence. The discontent of union workers? Anger over its salacious activities? NO. Just pissed off Public Image Limited fans in May 1981. You can read all about it here from a Rolling Stone article.

“PiL play behind a large screen, on which pre-taped video footage is projected. However, the audience doesnâ€™t get the concept (or joke…) and smashes the venue apart after 25 minutes!”

A year earlier, young Irish rock band U2 had their American debut at Webster Hall, back in its days as the Ritz. Their second performance there, in March of 1981, was reviewed by the New York Times, and the original review — by Stephen Holden, no less — is worth a look if you’re a U2 fan. My favorite line:

“Bono Hewson, U2’s lead singer, has a moderately strong voice that was partially drowned out at the Ritz. This was a shame, since the band’s material is of considerable interest.”

10 replies on “More Webster Hall history: Riot at the Ritz”

What a night that was!@!

I was there and I am actually in the picture you have. I am the kid in the MC Jacket facing off with a roadie in the upper right side of the photo.

I am actually kinda centered on top. I have dark hair and my friend was the blond next to me. Later tonight I will look thorough the shoebox that holds the memories ans see if I have the ticket stub.

I just found my “ticket stub” from that show. I put it on my blog

I’ve listened to your podcast (two shows, actually) for the first time, and I love it. It’s fun, lively, informative. Keept it up, guys!

I was there. Johnny Rotten got wat was comming to him

oh, lord, so proud to say I was there, too! Under a table when the ashtrays and bottles began to fly but we were laughing and loving life under that table. Roadies shielded the band, which was about to be murdered, and fuck (can I say fuck here?) we didn’t care.
Music was the spark then and we punks were live wires. Different times. – Boxodreams

Shit i was their too got hit with a mic stand.

Wow, and then I was born four months later. Do any of you guys remember where you were five months before that? Neither does my mom. Yo B Boys thanks for all the help in my research! XX

I got hit over the head with a beer bottle that day…just bounced off..lol Over all, the chaos was a great experience. Johnny has an incredible talent for pissing people off..you have to love that about him.

how many people were at this? it seems like all 1500 people have blogged! (no i wasn’t there but i remember it)