Perhaps no mayor of New York City this side of Fiorello Laguardia has ever overseen so drastic a change to the landscape of the city than George B. McClellan Jr.

Below: Mayor McClellan in 1904, his first year in office 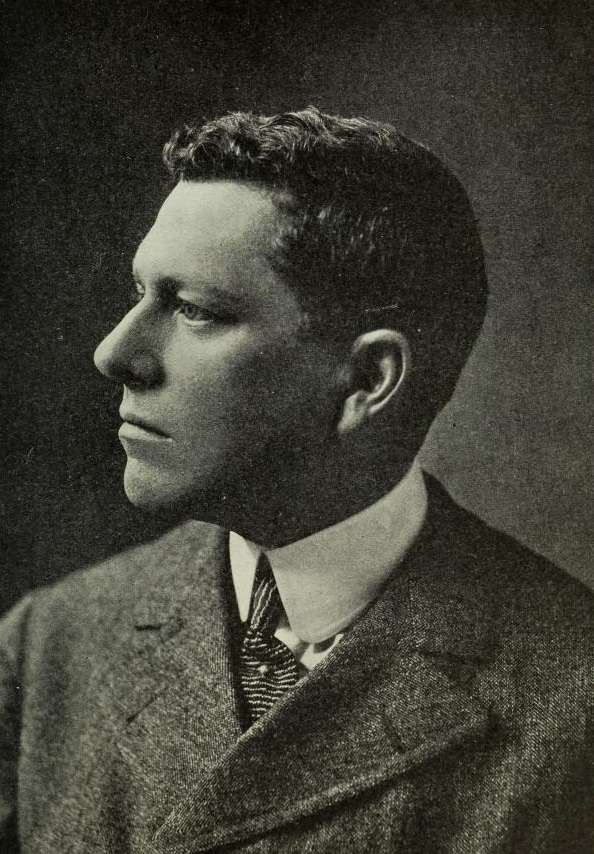 But oddly, George is perhaps best remembered today for his half-hearted but successful campaign against motion pictures.

If his name sounds vaguely familiar, thank your high school history teacher. George Jr. was the son of the ultimately disastrous Civil War general of the same name, a Union general first fired by Lincoln, then defeated by him in the presidential election of 1864. Despite this, George McClellan Sr. did become the governor of New Jersey, providing his son with a model of leadership he would implant into his many civic duties. 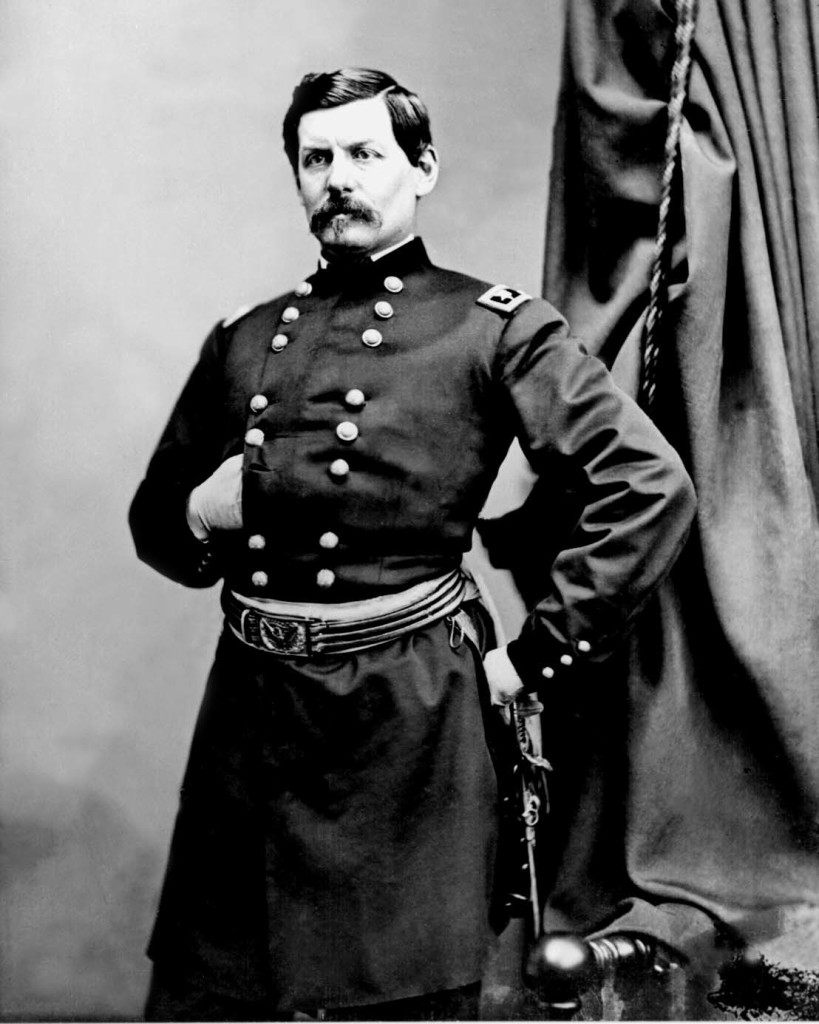 The dashing George Jr — or you can call him Max, his family did — is one of New York’s few foreign-born mayors, born in 1865 in Dresden, a few years before it was absorbed into Germany. Growing up in New Jersey while father governed, George graduated from Princeton in 1886 and a couple years later ended up as a writer for the revitalized New York World, Joseph Pulitzer‘s popular scandal sheet, in its brand new office on Newspaper Row — just across the street from George’s future office at City Hall.

Actually, George was mayor before he was really mayor. Name recognition and an inherited interest in public service placed him on the Board of Aldermen (precursor to the City Council) by the 1890s, and he was elected board president in 1893. The next year, due to an absence from the city by sitting mayor Thomas Gilroy, McClellan, age 29, became the acting leader for a month.

His biggest controversy? Raising on Irish flag over City Hall for St. Patricks Day, outraging local schoolboys. No, really. He even received threats of bodily harm, but held firm. Deal with it, he told the boys.

Snugly in bed with Tammany Hall and a favorite of ole Boss Croker, McClellan spent the next several years representing New York in the U.S. House of Representatives. He returned to the New York scene in 1903 as a Tammany instrument to oust mayor Seth Low, a reform ‘clean-up’ mayor who may have irked more than a few tavern owners.

McClellan, with Tammany’s blind eye towards New York’s more lascivious industries, handily won. And would stay in office for six years, making him New York’s longest serving mayor since Richard Varick in 1789. (The man he beat for re-election in 1905? William Randolph Hearst.)

New York blossomed under McClellan’s reign, with many long boiling projects coming to fruition. One new bridge, the Williamsburg, opened under his watch with another (Manhattan Bridge) well on its way, he unveiled lofty plans to improved the city’s water system, and he gave Longacre Square a new name (Times Square). The Battery Maritime Terminal (built in 1906), that jade beauty next to the Staten Island ferry, is even dedicated to McClellan. New York Public Library was nearly completed — and Grand Central Terminal half-way done — by the end of his term.

An intrepid tale springs up about McClellan involving the grand opening of the IRT’s first subway tunnel in October 27, 1904. Meant only go ceremonially start up the engine of the first train, McClellen requested that he would like to actually go ahead and drive the train all the way up to Harlem! (And Bloomberg brags that he only rides the train.) He deftly steered the new engine up to 103rd Street before handing over the controls.

To me, McClellan’s biggest contribution is valuable indeed — overseeing the construction of the Chelsea Piers (below), which allowed massive steamships to dock in the city, turning New York into a truly international port. By 1907, in fact, the Lusitania was already at dock here, although the terminal wasn’t officially completed until 1910. 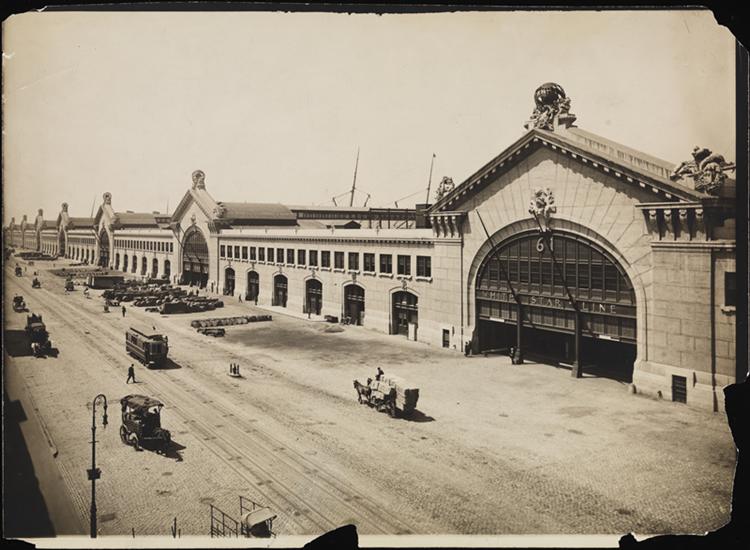 Yet with all of these remarkable changes, the story which arises the most about McClellan involves his war against a technological threat — the rise of cinema.

By 1905, the city had dozens of ‘movie houses’, nickelodeons and amusement arcades where patrons could pay a penny to see the birth of the motion picture. A theater owned by Marcus Loews, quickly to become the biggest name in film exhibition, opened in New York in 1904; the city got its own production company, Biograph, in 1906.

This new moving pictures craze was sweeping the United States — two million patrons in 1907, according to the Saturday Evening Post — and like everything foreign and new, it was soon seen as a corrupting influence, ‘demoralizing’ children, a bastard offspring of vaudeville and burlesque.

Some accounts have McClellan ardently opposed to this new medium on those grounds. I prefer a more rational theory: by 1908, McClellan had his eye on a new job — president of Princeton University — and in order to get that, he had to be seen as sticking up for higher morals. (Something Tammany candidates aren’t exactly known for.)

Below: McClellan steps from a newfangled automobile onto the streets of Union Square in 1908 (pic courtesy Shorpy) 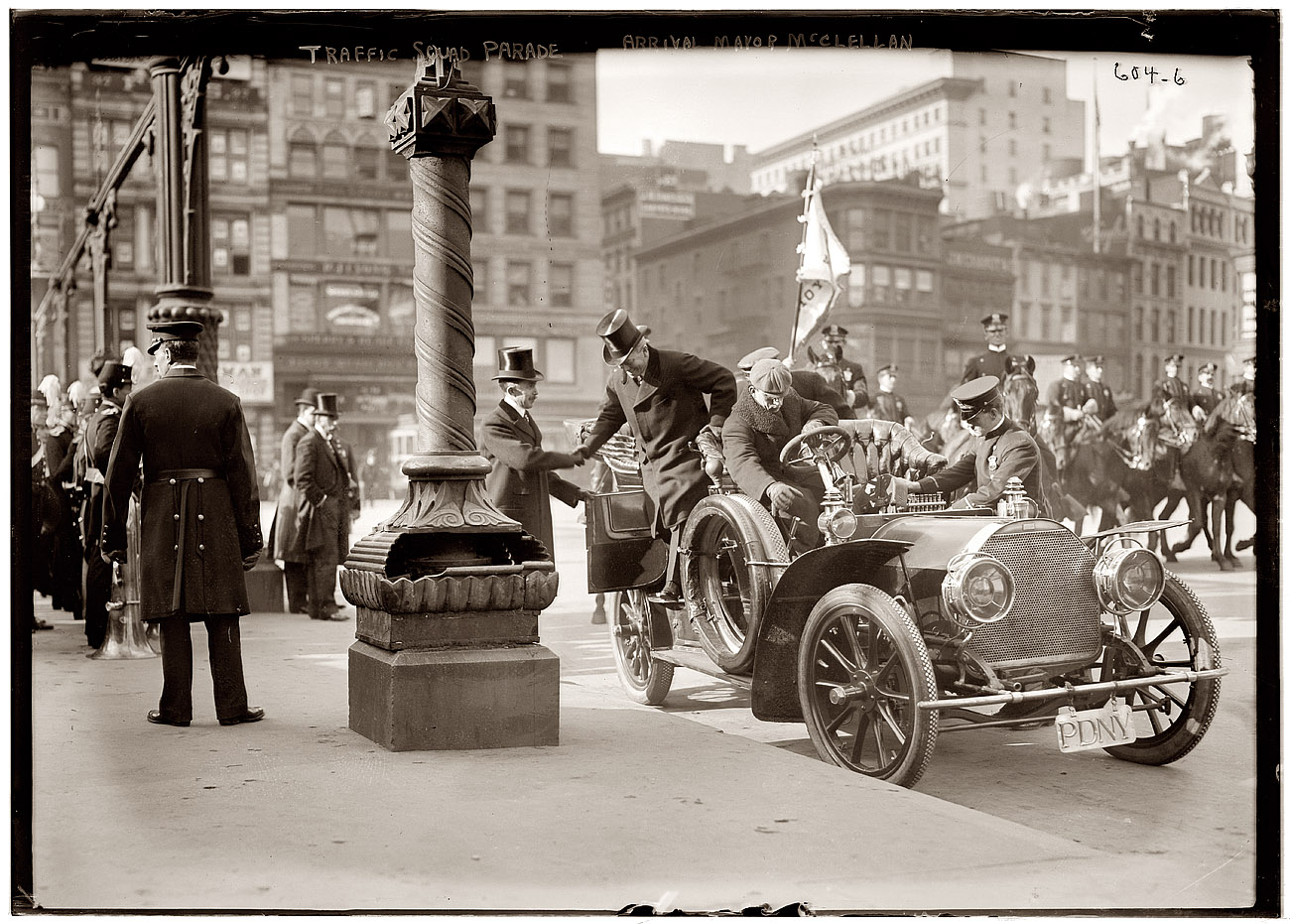 And so, on the technicality of being dangerous fire hazards, McClellan tore up the licenses of over 550 motion picture exhibitors — yes, that’s right, 550. (Nickelodeons were in music halls, taverns, even a few restaurants.) Most were not reinstated until the debut of New York’s Board of Censorship in 1909, a reviewing board which ended up not censoring much of anything. By the 1910s, movie makers and theatre owners were becoming too powerful to overrule.

By why was McClellan looking for a new job in the first place? In 1908, he was not long for the mayor’s office. Like blessed as Tammany Hall golden boys, McClellan got a conscious in his second term, hiring many non-Tammany employees and rooting out a mountain of Tammany related corruption in civic offices.

This turncoat did not please new Tammany boss Charlie Murphy, no it didn’t. In 1909, Tammany put up their new contestant, the colorful William J. Gaynor. (Incidentally, he also beat William Randolph Hearst, in his second and final unsuccessful run at the office.)

McClellan never became the president of Princeton, but he spent his remaining years teaching there until 1931, when he retired to the good life, writing books about his real passion — the history of Venice. He died in 1940 in Washington DC and was buried in Arlington Cemetery.

But clearly, it’s to New York that he belong.

Below: in this 1905 Harpers Weekly cartoon, McClellan is seen as a little boy holding the Tammany tiger, devouring the ‘fusion candidate’ (Seth Low). President Theodore Roosevelt peeks from the side. (He always did like wildlife.) Within three years, McClellan would be the devoured. 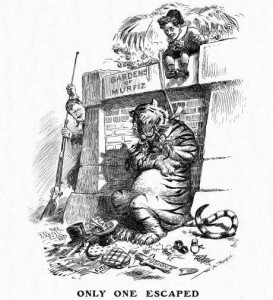 6 replies on “Know Your Mayors: George B. McClellan Jr.”

[…] As head of Alderman and acting mayor in the 1890’s, he was famous for ordering an Irish flag raised over city hall on St. Pats and didn’t back down when questioned about it. As mayor, he named Times Square, builte bridges. He established the first NYC subway and drove it himself for the first ride. (This according to the excellent Bowery Boys Podcasts Know Your Mayors: George B. McClellan Jr. – The Bowery Boys: New York City History.) […]

Wow! I knew I was related to the general but not to the mayor.

Wow indeed! You have an interesting historical lineage.

Hey wow I’m related to him too!! That’s so cool

Here’s a nice shot of McClellan with Buffalo Bill you can capture for this page.