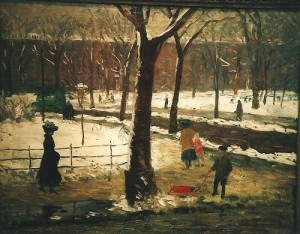 Washington Square Park, in a 1910 painting by William Glackens

While perusing some archive New York Times articles in preparation for this week’s podcast, I came across this unusual piece from May 12, 1892, recounting the futile search for a “maliciously mischievous fellow whom the police want,” a felonious fop tripping ladies in Washington Square Park with his umbrella.

He is referred to in the article as ‘Jack The Tripper’, London’s own Jack the Ripper having gone on his murderous rampage almost four years earlier. The intents of New York’s villian, however, appear to be largely comedic.

The debonair, middle-aged man carried “a gold-handled umbrella neatly encased in silk” and spent the day using the instrument to wreck havoc on the days of poor ladies minding their own business.

“He was swinging [the umbrella] in a careless manner, but when a young schoolgirl carrying an armful of books passed he tripped her up…The girl almost fell on her face and the books she carried were scattered in all directions on the pavement.”

He was then seen at the recently built Washington Square arch where he tripped an old woman “in the identical manner” as the girl.

Next went down a young school teacher who got up and confronted the scoundrel over these “malicious” acts. The teacher ran to the Mercer Street police station to file a report, but the disturbed umbrella-wielding cad had fled the scene. The police “failed to arrest him.”

Meaning, he’s still out there, ladies!

1 reply on “Beware Jack The Tripper, scoundrel of the Square!”

In other turn-of-the-century urban danger news, I came across a Times article the other day, I think from the 1890s, about the dangers of “gay riders” — you know, those punks who insist on riding those new-fangled bicycles with no hands!