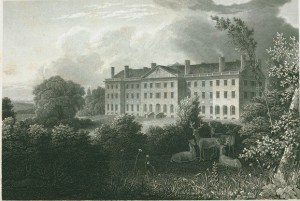 The charming structure above, depicted as though it were a rest stop on the road to Eden, sits on land now occupied by Columbia University in Morningside Heights.  Students driven mad by their studies can find cold comfort knowing that the former occupants of this acreage were also mostly certifiably insane. Welcome to Bloomingdale Insane Asylum, one of the first institutions of its kind in America, opening in 1821.

This Bloomingdale has nothing to do with the creators of Bloomingdale’s department store, the sons of Benjamin Bloomingdale.  The lands northwest and well outside city limits of 1820s New York were referred to as simply Bloomingdale, most likely a derivation of an old Dutch word ‘Bloemendaal‘.  Bloomingdale Road, the path from 23rd street that ran up to Harlem, would later be renamed Broadway.

The Bloomingdale Hospital Centenary, as it was called, sat at 116th Street and Bloomingdale until it moved to White Plains, NY, in 1894.  Employing the latest advances in psychiatric study, the hospital released an announcement in 1821, declaring, “This institution has been established with the express design to carry into effect that system of management of the insane, happily termed moral management…”

The alleged ‘morals’ of these asylums were called into question by reformers, many years before Nellie Bly would perform her crackerjack investigations at Blackwell’s Island’s own asylum. In 1872, the hospital reacted to accusations of abuse with the following statement printed in the New York Times:

“In reference to the report of the Visiting Committee of the Bloomingdale Lunatic Asylum, published in the Times some days since, Mr. Townswend, council for Mr. Van Vleck, yesterday stated to a reporter that these charges had often been made against similar institutions, but never before so direct.

The insane, he said, were kicked and choked until blood spurts from the mouth and nostrils — some being driven to suicide by systematic cruelties.

He commented on the report of the overseers, making out everything to be ‘lovely in the Asylum…. “Does anybody suspect that the people employed in such institutions, while still under engagement, would risk their positions by admitting that they had practiced outrages upon the patients, or had been lewd in their actions?”

Apparently, that question was not answered to anybody’s satisfaction, as accusations of misconduct dogged the institution.  By the 1880s, as the city grew up around it, landowners complained that the asylum was bringing down property values.  (This was the impetus for putting such ‘charity’ institutions on New York’s islands in the first place.)  Eventually it was decided to move Bloomingdale’s outside the city entirely.

Although most of the building was demolished, at least one part were left untouched and remains part of the Columbia University campus — Buell Hall (also known as the Maison FranÃ§aise) sitting next to Low Memorial Library.  The building that houses Maison FranÃ§aise was once Bloomingdale’s exclusive asylum for wealthy men who could afford to keep themselves from the general population. Essentially, for the insanely rich. 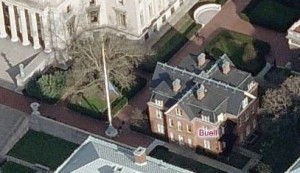 6 replies on “Asylum! The insane foundations of Columbia University”

My parents both attended Columbia and my mother mentioned the tunnels under part of the campus – I think that they were part of the asylum structure, as well.

I suppose if I believed in ghosts this would be an adequate place to house a couple hundred lost souls.

Are there any alleged haunted houses in New York City?

The tunnels under Columbia, second in their enormity in the world only to the Kremlin, were part of the Manhattan project, as far as I know.

Large institutions incorporate tunnels into their architecture as a means of transportation for food carts and things like that. Patients do not have access to such portals, they’re used by staff only.

[…] the Willowbrook State School is today the College of Staten Island. In uptown Manhattan, the former Bloomingdale Asylum is today’s Columbia […]