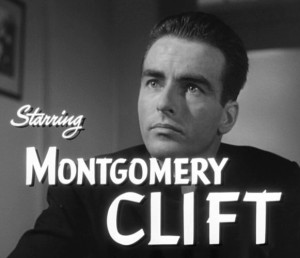 One curious fact we mentioned in our Prospect Park podcast is that classic film actor Montgomery Clift is actually buried here, in a quiet Quaker cemetery near the southwest entrance of the park. As far as I’m aware, entrance to the tombstones is locked, and its so cloistered away in the woods that it’s difficult to find.

So why would a movie star be buried here of all places? The handsome Nebraska-born actor came to prominence in such searing Hollywood films as A Place In The Sun and From Here To Eternity. In 1956, Clift crashed into a tree while leaving the home of Elizabeth Taylor. (Hollywood lore famously suggests Liz raced to the accident scene and fished out broken teeth that were lodged in his throat.) His career was never the same after reconstructive plastic surgery.

Hooked on pain medication and driven to drink, Clift was found dead in his Manhattan townhouse at 217 East 61st Street on July 22, 1966. Clift was allowed to be buried here, quietly and with little fanfare, because his mother Sunny was a practicing Quaker. Still, these were the film actors; actress Nancy Walker planted two hundred crocuses around his tiny tombstone, reportedly designed by the same man who made John F. Kennedy’s marker at Arlington Cemetery.

The hidden cemetery of almost 2,000 graves, on this land long before Prospect Park, used to be larger. The city acquired only part of it however, and thus the graveyard remains the only patch of private land in the park.

Look here for a map of the area.

Manhattan! I just amended that in the article.