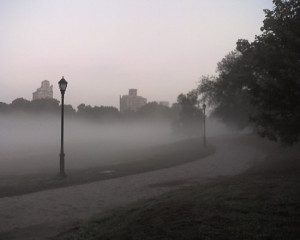 Cue the organ: Prospect Park can be a lonely place at times

As I was doing my research for this week’s podcast, I happen to come across a alarming number of news articles reporting grim and often grisly suicides that occurred in Prospect Park during the late 19th century.

What about Prospect Park made it such a magnet for numbers of suicides throughout the late 19 century? In the decades following the opening of the park, people came here to shoot, stab, hang, drown and generally do vicious harm to themselves, due to depression and despair brought on by illness, heartbreak or unemployment.

The reasoning is actually less suspicious. Parks were often the only place people could go in the 19th century to be alone and would have provided a peaceful respite for a troubled soul. Central Park probably has equally macabre statistics.

What I particularly loved about these early New York Times newspaper accounts is the sense of drama the writers give the stories, as if writing a mystery novel, not a news article.  The brief descriptions behind each death, however, give you enough of a window into each of these people’s life to feel empathy for their depressing situations. This, sadly, is only a sampling from that era:

1877 Polish journalist Edward Kulikowsky, editor of a weekly Brooklyn paper and a “finely educated man,” was found “lying sick in the grass,” the victim of self administered poison. “A note was also found in his pocket setting forth that he had taken poison one hour previous, that he has smoked his pipe since then with the greatest satisfaction, that if the poison did not kill him he would take another poison.”

1878 A man was found shot in the head one warm May evening at the 3rd Street entrance of Prospect. The victim still had the gun clutched in his still-warm fingers. “In his pockets were found 67 cents, a package of cigarettes and a copy of the morning newspaper of yesterday’s date. On the margin of the paper were written the words, “I know I have to die, and I shoot myself.”

1878 It’s believed that distraught German immigrant Ludvig Von Stein eventually died from his gunshot suicide attempt at Prospect’s Lookout Hill, his reason for ending it all being “that he had been unable to procure work and could not bear the complaints made by his wife on that account.”

1878 Yet another “unknown man of respectable appearance” tried offing himself this year, only this time with a razor. Found with his arm and throat cut, he also had a box of rat poison in his pocket.

1883 An unknown man was found hanging from a tree at the southeast entrance of the park, “with a gray beard, a deeply-pockmarked face, and dressed in a blue flannel coat and brown trousers and vest.” His body had been hanging from the tree for a couple days before found.

1883 A “young and respectably dressed woman” was seen wandering aimlessly around the park on December 11. Hours later her body was found floating in Prospect Park lake. On the bank nearby lay a “pocket-knife, covered in blood.” Officers on the scene believe she tried to cut her wrists first, then more expeditioiusly tried to drown herself. Her identity remains unknown. The article takes note to point out, “she had no money, but in a pocket of her dress was found a lady’s open-faced gold watch bearing the number 16,636.”

1889 Another young man shoots himself in the head, this time in the East Dale Shelter. I find it interesting that the news report included this information: “His linen was clean and new, and his underclothes of the best quality. On the sweatband of his hat was the name Peaslie.

1889 young David Moody follows that grisly example, a single gunshot, “sickly from childhood…suffered from an affection of the ear which at times made him almost crazy.”

1893 That now frequent sound of gunfire echoes once again, as an unemployed truck driver and Prospect Park neighbor kills himself one summer day, ‘despondent’ over his lack of employment.

1897 H.W. Tobias took his life March 1897 under a tree at the archery grounds near Prospect’s 9th Street entrance. He also held a suicide note in his pocket, declaring “he did not want to live any longer, as he was subject to too frequent and too severe attacks of rheumatism.”

1899 Hanging, shooting, drowning. What next? Poor Emily Goodison came to Prospect Park and took her life by drinking a container of carbolic acid. Passerby “Morris B. Roy….found her dying on a knoll in the park.” Her pocket also contained familiar souvenirs of grief: “two poems, clipped from the newspaper, both of which were in a melancholy strain.”

Is this rather grim feature of Prospect Park’s history making a comeback? Perhaps.

Just this February, a model hung himself in the playground of Mount Prospect Park, right next to Prospect Park. (The hill of Mount Prospect Park was originally within the proposed park grounds before Olmsted and Vaux got ahold of it.) Instead of a scrawled note along a newspaper found in his pocket, this unfortunate soul left his suicide note in the most 21st century of places: his Facebook page.

people are soooooooooo stange. another interesting entry by the bowery boys.

In the early 90’s a friend of mine hung himself from a tree by the 15st entrance of prospect park.