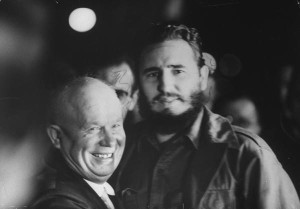 Nikita Khrushchev, Cold War leader of the Soviet Union, is perhaps the strangest tourist New York has ever seen. Pete Carlson’s new book ‘K Blows Top’ (named for a snarky Daily News headline) documents Khrushchev’s odd and rocky thirteen-day tour through the United States, in September fifty years ago this year. I heard Carlson on On The Media over the weekend and was particularly struck by an event that occurred at the Waldorf Astoria, an embarrassing situation that might have sparked World War III.

Khrushchev’s arrival in New York was a press sensation and crowds (supporters, protesters and curiousity seekers) gathered outside the Waldorf Astoria, where he and his family were staying. The Russian leader happened to be riding the elevator with U.N. ambassador Henry Cabot Lodge Jr. and the manager of the Waldorf Astoria when the elevator abruptly stopped between floors.

The manager was unable to get the elevator working again, so Khrushchev had to be lifted up with the U.N. ambassador literally shoving the Russian’s buttocks out of the stalled elevator car — which then became functional moments later.

Believe it or not, this was the second controversy surrounding Nikita and the Waldorf Astoria. The first involved a convention of dentists booked in the hotel at the same time as Khrushchev’s visit. Mayor Robert Wagner asked the dentists to move so that he could throw Khrushchev a luncheon there. The dentists adamantly refused.

Russians vs dentists. You’ll have to read the book to find out who wins.

I don’t have any pictures of Khrushchev crawling out of an elevator, but enjoy these images, courtesy Life Google images, of his visit to New York. Carlson’s book has other details of his trip, including Nikita’s lackluster opinion of the Empire State Building. 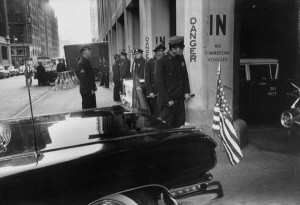 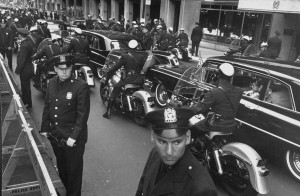 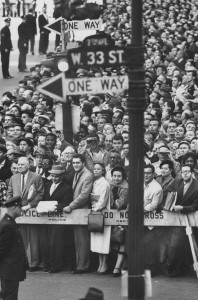