Gennaro Lombardi and (I believe) Antonio Totonno Pero with a dog who must have been fed very well. You’ll notice that Lombardi’s is still a grocery store in this picture. Some bananas with your pizza? Although Gennaro is credited with opening New York’s first pizzeria, it may have been Antonio who came up with the pizzas.

New Yorkers are serious about their pizza, and it all started with a tiny grocery store in today’s Little Italy and a group of young men who became the masters of pizza making. In this podcast, you’ll find out all about the city’s oldest and most revered pizzerias — Lombardi’s, Totonno’s, John’s, Grimaldi’s and Patsy’s, in all its variations.

But if those are the greatest names in New York-style pizza, then who the heck is Ray — Original, Famous or otherwise?

New York-style pizza, in its purest form. Lombardi’s pizza was also sold by the slice back in the day, though today its strictly whole pies. And they no longer don’t wrap them up in paper and tie them with string like they used to! 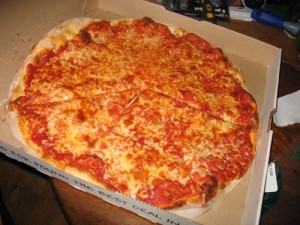 Pictures from Totonno’s official website of its creator Antonio ‘Totonno’ Pero, who opened his first pizza restaurant in Coney Island in 1924. The original location was gutted in a fire just this year, but they should be reopening anytime. 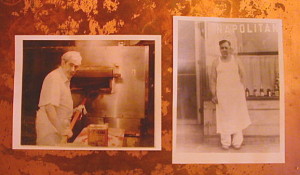 Although John Sasso had the great misfortune of opening his small pizzeria just as the Great Depression was getting started, it managed to survive through hard times to become the West Village’s go-to destination for classic slices. 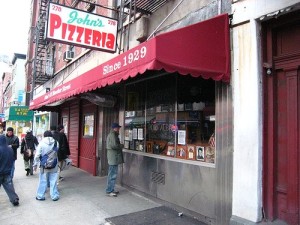 Patsy Lancieri opened his great East Harlem pizzeria in East Harlem in 1933. They’ll be celebrating their 76th anniversary next month with some truly retro prices. Get there early this time — let this be a warning. 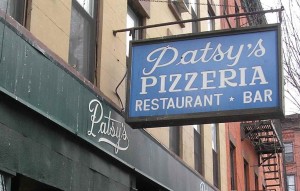 NOT to be confused with this place — the venerable Patsy’s Italian Restaurant in midtown. This Patsy’s does not sell pizza. 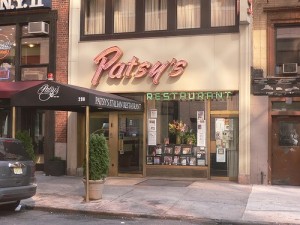 To make sure you don’t confuse the two, why don’t you read a U.S. District Court document ‘Patsy’s Italian Restaurant v Patsy’s Pizzeria‘. The words ‘Sauce Litigation’ are actually used.

Grimaldi’s “under the Brooklyn Bridge” used to also be a Patsy’s. Today it’s your surest bet for a long line, reportedly still worth the wait. 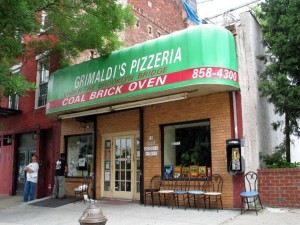 I had to comment about the Pizza podcast…
I grew up going to the Ray’s Pizza at Sixth Avenue and 11th Street in the West Village during the late seventies and early eighties. There was always a line, and the gigantic slices came with about a half-inch of mozzarella on them. They were delicious, and well known as the best in town, THE famous Ray’s, and we all swore by them.
Later, I moved away from New York, and hadn’t been back in 20 years, so when I attended a professional conference with a few co-workers a few years ago, I dragged them down there from Midtown, because they HAD to have the best pizza in New York, the famous Ray’s.
Well, we get there, the place is almost empty, it is being run by people from a visibly non-italian ethnic group, and, well, the pizza sucked. What a letdown. My friends were mystified, and I had to conclude that the place had been sold, and it was no longer the leading pizzeria in town, but now was just another of the hundreds of fake Ray’s imitators.
Thanks for you listing of the best pizzas in New York, next time I’ll know where to go for a slice.

This episode celebrates one of my favorite NYC institutions: PIZZA! Thanks for covering this, guys. Also, not to be forgotten is Pomedoro pizza in SoHo. The vodka slice is fantastic.

I know I am 3 years pot-article (last post in 2009) but I just wanted to comment that if you want the BEST pizza, you need to follow the demographics (not the trendy places where NY Magazine decides is the best).

Lombardi’s is Mecca, the Vatican, and Jerusalem all wrapped up in one. However, it is an oasis …there are no more Italians in “little Italy.” My father grew up there on Spring (about 50 yards from Lombardi’s) and when his generation left, that was it – end of an era.

You need to make a pilgrimage to the last place in NYC where Italians (yes, real Italians) live: Staten Island. . Recent statistics indicate that 43 % of Staten Islanders have Italian roots. Guess what? They have the BEST pizzeria in NYC! Joe & Pat’s, Nunzio’s, Denino’s, 3 Brothers, Giove’s, Goodfella’s. . . Now we’re talkin’ pizza!