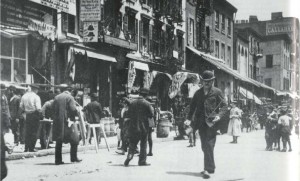 Old Hester Street: Could that gentlemen be the murderer*?

Grim news today from the Lower East Side: the residents of 128 Hester Street have been forced to evacuate their home due to the structure being declared ‘unsafe’ by the Department of Buildings. And boy, is it. The terribly dilapidated tenement suffered “cracks on the wall, holes in the ceiling, termites on the floor, holes in the floor” according to one tenant.

The building, right off the Bowery, was erected in 1910, and looks every bit of it; however the building it replaced at the same address had long before achieved a bit of notoriety itself. Like many buildings in the area, 128 Hester Street housed a former saloon, called The Old Stand, finding itself in the headlines one October 1906.

Across the street was another saloon called The Star. Early one morning, officers discovered a man slumped in the doorway with a knife wound to the heart. The victim, one ‘Yaller’ Wilson (nicknamed for his yellowish complexion), died of his injuries shortly after.

Who killed Yaller? Inconclusive from the records I’ve found, but one suspect is a former employee and bartender at the Old Stand, Joseph Coyne, who was taken in for questioning. He claimed he attempted to stop the altercation between Wilson and an unknown man, receiving a “cut across the back of the hand.”

Also suspiciously on hand was Wilson’s own wife Emma who provides the police with an odd story in which she seems to have entered the Star saloon with the same ‘unknown man’ and suspected murderer, who then go into an argument with her husband. This is truly a rough and tumble group; the events all seem to take place between the two saloons in the wee hours of the morning.

Enjoy reading the original report in the New York Times to see if you can make sense of this strange, mysterious murder.

Police believe Yaller was extorting money from the stranger, who met the threat by killing Wilson. But is the unknown man the real murderer, or are our two suspects hiding something? The suspect is “45 years old…had a dark complexion and a sandy mustache, and wore a brown suit and a black derby hat.”

*No, probably not. This picture was taken a good ten years before the murder took place. Plus, everybody wore black derby hats back then.