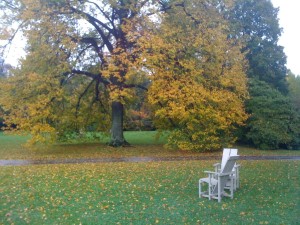 Showtime in the Hudson River Valley has begun in earnest, with the change in season transforming New York in splatters of colorful chaos. You could simply wonder a city park of course, but I again recommend New York City’s two best options — the New York Botanical Garden and Wave Hill, both in the Bronx.

The show is displayed in Glyndor Gallery within one of Wave Hill’s old mansion homes, although one installation by an artist named Edgar Heap of Birds presents startling glimpses of information via scattered highway signs over the campus: 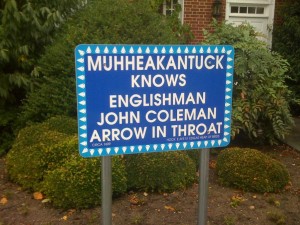 John Coleman, incidentally, was the unfortunate member of Henry Hudson’s Half-Moone party. (Learn more about it in our Henry Hudson podcast.)

Speaking of fall changes, we’re change up our look around here over the next couple days including some new art for the blog and podcast. We apologize now in case things get a little odd as I test out various changes. 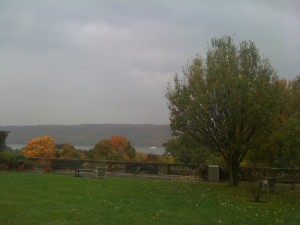 1 reply on “Wandering through Wave Hill and Hudson River history”

Behind this formal park at Wave Hill, I discovered accidentally a NYC Parks Dept park behind it that is almost impossible to find.
It parallels the NY Central RR line along the Hudson River, is very old, unattended, primitive and has only one obvious entrance.

Not sure exactly how to describe it, but you go to around 232 Street Street near the Hudson, and there is a RR station stop there. Or, alternately, take a left coming out of Wave Hill and go about 1/3 of a mile to a T-junction. Make a left and travel towards aforementioned train stop.

Anyway, you will see a small parking lot for about six cars. Park. Enter the imperceptible entrance.

That is where the entrance to this incredible park. Once you are in it, you feel like you are alone in the city, walking in a park in the Adirondacks, expecting to run into an Indian. It is large and largely empty and devoid of people. It is like no other park in the city.

When visitors step off the city block into this Hudson River park, they get a welcome respite from the hard concrete reality of urban life.  In contrast to the manmade world, Riverdale Park offers its neighborhood natural wonders that delight all five senses.  From the sight of brightly plumed birds to the feel of five species of tree bark to the muted sound of a river’s flow, Riverdale Park is a spot waiting to be discovered and prized
PARK FACT:The southern part of the park is covered by the same type of forest that existed in pre-colonial times, where tulip trees as tall as 110 feet rise from the slopes of the ravine.