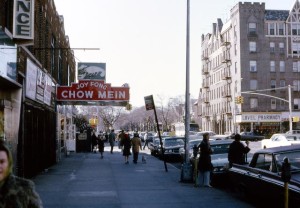 I have this thing for kitschy Chinese restaurant design, so this picture from 1971 made my day. Joy Fong Chow Mein was located on Avenue J and Coney Island Avenue in the Midwood neighborhood of Brooklyn nearby Di Fara’s Pizza and the old Midwood movie theater (which closed in the early 80s). Joy Fong is also long gone, including this massive sign.

Writer Pete Cherches has a wonderful recollection of the restaurant and eating Chinese food in Brooklyn in the 1960s. He says of Joy Fong: “a now-defunct place that retains an almost holy status in the memories of Brooklyn Jews of a certain age. I wouldnâ€™t be surprised if people visit the site of the former restaurant and wail against the wall.”

14 replies on “Joy Fong and memories of Chinese food past”

They had the BEST food. I was friendly with one of the owners daughters. During the off hours the owners and the waiters used to make the wontons.

We moved into the neighborhood in 1949 when I was 2 1/2. Our apartment was on Avenue K between 14th & 15th. Joy Fong was my introduction to Chinese food, and for years it was the only Chinese restaurant I knew. My favorite was shrimp and lobster sauce. My mom always ordered moo goo guy pan. Spare ribs and pepper steak were other favorites. We went there a lot, but it was always a special treat. Even when we moved in 1952 we were still in the neighborhood so we kept going there. Their son went to my school (P.S. 99). I think his name was Joe.
When I was about 4 my dad set up an aquarium in our apartment and I got very interested in tropical fish. I think Joy Fong must have had a nice aquarium because I associate them with that.
Nice to see that photo. It really brings back memories.

`When I was a kid in the 40′ and 50′, we used to go there for dinner one Sunday a month. Remember very friendly owner. Eating Chinese food was such a Jewish ritual in Brooklyn.

I used to go there in the 1940s. I remember once they were rationing sugar because of the war and my parents brought in their own sugar for the tea. My father knew the owner, Joe, a very friendly man, and he told my father that he had two wives, one in China and one in the US. Joy Fong was my introduction to Chinese food and I have never forgotten it.

We didn’t eat pork at home but going out to Joy Fong was our excuse to be able to eat it. I remember a John’s Bargin Store across the street.

I was born in 1951. and as a kid I remember on special occasions we used to walk down to Joy Fong order and either eat there in a terrific atmosphere or take it home. I remember two men both good looking and had black hair one always wore suit. The smells were absolutely terrific. Even as a adult when I lived in the neighborhood I would order take out from Joy Fong. I checked Joy Fong out on the internet hoping the family opened somewhere else, but no success.

I remember this Mecca of Chinese food as well. My family ventured there seemingly every other weekend. My recollection was that the food was far superior to that of anything else unless you ventured from Brooklyn to Chinatown.

If I’m not mistaken, one of the owners was named Ben. He greeted you as you walked through the entrance. Whether it was his true name is unimportant. The food and to a lesser extent, the atmosphere and ambience are what left an indelible impression on those of us that ate there, whether it was weekly or monthly.

Those were really great times and difficult, if not impossible to replicate. All generations will make this statement but it was a different time. For me, those memories are from 1965 through perhaps, 1973. We were not far removed from the loss of JFK. RFK still offered a glimmer of hope for the resurrection of the New Frontier. Once we lost RFK & MLK, things changed rapidly. Certain sections of Brooklyn suffered from urban blight as we approached the mid 70’s.

I feel very much like one of the other patrons of Joy Fong. In some weird way, we anthtopomorpasized the marquee out front and gave it a life of its own, or perhaps we’re yearning for the past as our own mortality somehow ties into the loss of that neon, now defunct, Joy Fong sign.

What remains for all of us that were fortunate to have experienced Joy Fong are the memories of the great food, the gathering of family. Ultimately that is what we all seem to miss.

I was recently eating Chinese food with a friend in Kingston and we both discovered that we used to eat at this restuarant when we were kids in Brooklyn. Neither of us could remember the name, the only thing that kept coming to me was “Joy”. My brother searched the internet and found this post and I am so happy to see this and now I know the name. We used to go there regularly when we would pick our grandma up from her apt on Ocean Parkway. This was the neighborhood where my father grew up. Fond memories of this place, and the food was really good, a step up from our other regular chinese place we used to go to in Brighton Beach.

I grew up on Glenwood Road near Coney Island Avenue in the early 1940’s. We ate at Joy Fong’s about once a week until I left for college in 1960. I still have a (stolen) menu which was pilfered by a fraternity brother of mine from Sea Gate. I still look at it and have fond memories or their egg rolls, roast pork, spare ribs, and lobster Cantonese etc. Wish I could go back to Heaven on Avenue J.

At 72 years old I am still looking for a restaurant to measure up to Joy Fong. I remember the short spareribs and their special homemade duck sauce, was to die for. Still good friends with people who grew up on Avenue J we are all still trying to match a Chinese restaurant as good as Joy Fong. I went to PS 99 and many days we had lunch at Joy Fong. In the 1950s we would share a luncheon special of wonton soup, chow mein, white rice, and ice cream for 75 cents. A quarter tip. For 50 cents each we ate like a king. Happy to see so many Joy Fong fans. If you can find anything that matches it please let me know. ?

I remember the owner would get extra help for the night after Yom Kippur! How weird, many Jews broke the fast with Chinese food.

I remember Joy Fong as the only Chinese restaurant around. I went to school with Joey Lee whose family owned the restaurant. I remember the oil painting portrait of Joey and his little brother that hung over the reception desk. Joey also gave me my first taste of ham. In second grade we shared a double desk and would share our snacks. One day he brought a ham sandwich and gave me half.

I don’t know why I thought of this restaurant today, but I did and I’m blown away that it’s posted on the internet. I didn’t live in the neighborhood; I lived in what’s now called the Madison neighborhood near Ave U and Bedford Ave. (Acutally E. 27th St between Aves. S and T. But I had a college friend in the mid-1960’s who lived on Ave K and E. 14th St. who introduced me to Joy Fong. I recall with great relish the meaty spare ribs and the subgum fried wonton platter — a huge platter of shrimp, chicken, roast pork, Chinese veggies and fried wontons. Incredibly large and incredibly good. I introduced my future wife (now of 51 years and who lived in Queens at the time) to Joy Fong and she, too, has fond memories of the place and the food. Alas, times change and memory fades, but I don’ think this memory will now that I can bookmark it and look at fondly whenever I wish.