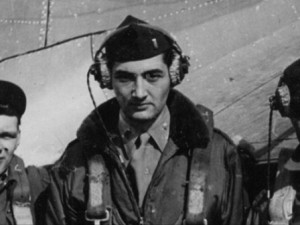 Above: Howard during his tenure as an Air Force pilot during World War II

The controversial historian and Brooklyn native Howard Zinn, champion of the proletariat in writings like his A People’s History of the United States, died yesterday at age 87. His People’s History is a classic of what was formerly considered underground history, shedding light on union organizers, New York sweatshops and the immigrant experience from the early days of New York history, touching on the Draft Riots, the Triangle Factory fire, and even the failed mayoral bid of economist Henry George.

Here’s Zinn on New York’s reaction to the ratification of the Constitution:

“When the ninth [New Hampshire] and tenth states [Virginia] had ratified the Constitution [in 1788], four thousand New York City mechanics marched with banners and floats to celebrate. Bakers, blacksmiths, brewers, ship joiners and shipwrights, coopers, cartmen and tailors all marched. What [Staughton] Lynd found was that these mechanics, while opposing elite rule in the colonies, were nationalist.

Mechanics comprised perhaps half of the New York population. Some were wealthy, some were poor, but all were better off than the ordinary laborer, the apprentice, the journeyman, and their prosperity required a government that would protect them against the British hats and shoes and other goods that were pouring into the colonies after the Revolution. As a result, the mechanics often supported wealthy conservatives at the ballot box.”