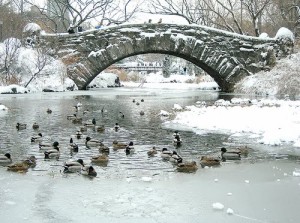 “I live in New York, and I was thinking about the lagoon in Central Park, down near Central Park South. I was wondering if it would be frozen over when I got home, and if it was, where did the ducks go? I was wondering where the ducks went when the lagoon** got all icy and frozen over. I wondered if some guy came in a truck and took them away to a zoo or something. Or if they just flew away.” — Catcher In The Rye

Another great author gone, another great book featuring New York City remembered. J.D. Salinger died yesterday. Although he lived for most of his life in Cornish, New Hampshire, his youth was spent in the city, and in fact he went to college for a year at New York University, then at Columbia University where he had his first short story published. (He never graduated.)

Salinger was born on January 1, 1919 at the Nursery and Child’s Hospital at West 61st Street and Amsterdam. The hospital was eventually absorbed into the medical complex known today as New York Presbyterian Hospital and Weill Cornell Medical Center. 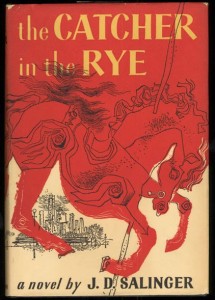 His first home was at 3681 Broadway — literally across the street from the uptown Trinity Church cemetery! — but he would spend his adolescence in many other residences in the Upper West Side. But in his teenage years, the family moved to 1133 Park Avenue at 91st Street, a home that would loosely serve as a model for that of the Caulfield family.

In Catcher In the Rye, Salinger sent Holden Caulfield on an adventure through both real places (the original Penn Station, Radio City Music Hall, the lagoon in Central Park) and imagined. To track him through the streets of New York, I recommend visiting this site. If it’s been a few years since you read the book, visit the Dead Caulfields for a quick chronology.

**The “Central Park lagoon” he’s referring to the pond (indeed, often filled with ducks) in the far southeast corner of the park. As you can see, the ducks don’t go anywhere. Photo above by Lilybart, from the Central Park website.

2 replies on “J.D. Salinger and the frozen ducks of Central Park”

Here are my thoughts on the symbolism of the ducks as it operates on two separate and distinct levels…of course this is written more than 10 years since last reading the book, so forgive any inaccuracies:

Holden is someone who has endured many things (the loss of Allie, the pressures of his parents, the phoniness of society and his elder brother in general, expulsion, etc). I feel that real love in his family has been somewhat hard to come by with a few most notable exceptions, his younger sister Phoebe, his dead brother Allie, and perhaps on an attenuated level, Jane. With Allie gone and preferring to think of Jane as she was (young, pure, and innocent) rather than to be with her (or possibly face the rejection), he is left to protect his sister Phoebe, to protect in her what he lost in Allie. This is the love that inspires him to wish to protect the young, pure and innocent from the phoniness and corruption of adulthood. This is what inspires him to consider becoming the “Catcher” or to protect children from their own inevitable “fall” (as Mr. Antolini put it). By acting as the catcher or the zoo keeper, you can protect the innocent not only from the dangers of life, but even the apprehension that might come from knowing just how dangerous it can be.

The ducks operate as a metaphor on this level because they embody the concept of allowing the unwitting (ducks) to either face the harsh realities of life (the cold) or alternatively to be saved (zoo keepers) or told how to avoid it altogether (fly south). On this level, Holden feels like the zoo keeper charged with protecting the lives of the pure. His anxiety over this question is based on the fact that he is facing the same dilemma. Is it for him to save the innocent?

On a second level, it seems as though the ducks operate as a metaphor for Holden himself. Notably, Holden is considering his own migration west with Sally Hayes when he suggests that they just leave. On a related third level, Holden himself is trying to avoid growing up. On this level it seems the ducks might represent Holden “flying south” by a mentally fleeing to avoid life and avoid adulthood, or alternatively to stay and face adulthood head-on.

In the end it seems Holden is left only knowing that life will take its own course and that “you hafta” let others reach for the golden ring because “If a kid wants to reach for a gold ring, then you have to let her. If she falls off, she falls off.” He understood that the world didn’t stop for him when he had his own mental break down or when Allie died and that the carousel of life will always move on and that riding it is more of a privilege than a right. The duck metaphor is perhaps particularly effective as the concept is very much a zen-like idea of transcendentalism and of course the use of nature (in a city so far removed therefrom) plays into the nature of zen.