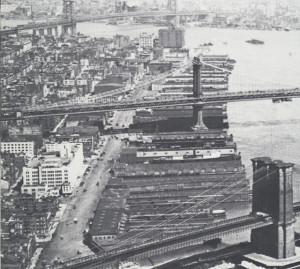 Williamsburg, Manhattan and Brooklyn bridges, well before the FDR Drive.

New York Times architectural critic Montgomery Schuyler passed away in 1914, just as New York was entering a new era of the skyscraper. Schuyler was “a stanch advocate … who believed it was a legitimate development and architectural expression of the times.” An unfortunate loss, is it seems his words were crucial in forming public opinion for a certain project — or in the case of some unfortunate projects, against it.

His rich diatribe from the March 1909 issue of the Architectural Records provides the most densely eloquent contemporary criticism of modern New York bridge building. It’s also rather stodgy, quoting poetry and evoking ancient civilizations. I highly recommend you swim through the entire article if you’re interested, available in its wonderfully original format in PDF form here. However, here’s a few salient details:

On the Manhattan Bridge’s name: “The Manhattan is absurdly and meaninglessly miscalled; it has no more to do with this island than any one of the other three [bridges]. ‘The Wallabout‘ [for Wallabout Bay] is a designation that would have local and historical significance.”

On the Manhattan Bridge anchorages: “The effect of massiveness in these anchorages is almost more than Roman. They wear, indeed, an aspect of Egyptian immobility, and immobility is the very purport of their erection. Where in the world can one see a more impressive effect of sheer power than in the ordered masses of this Manhattan anchorage, which so few of us have thus far taken the trouble to see at all?”

“These anchorages give visible promise of a duration equal to that of the great temple of Ramses, or the great pyramid of Cheops.

On the Williamsburg Bridge: “The ugliness of the Williamsburg has been the means of an increased appreciation of the beauty of the East River. ….In spite of the proverbial prohibition against speaking ill of the bridge which has carried you safely over, the Williamsburg, as a work of art, has no friends.”

“No accessories, it is evident, could make an admirable or even a presentable work of art out of a project so bedevilled in the primary conception. “

On the Brooklyn Bridge: “But in the detail … we cannot help seeing that caprice has been allowed to play its part; that the form is by no means ‘inevitable’; is, in fact, contradictory of the function. The function of the towers, for example, is merely that of cable-holders. Nobody would ever guess it to look at them.”

Reflecting on the success and failure of the Brooklyn Bridge: “And, in the old East River Bridge, it is interesting and instructive to note that the successes are all won by letting the structure ‘do itself,’ so to speak, the failures all incurred by forcing it to do something else.”

photo above from A Picture History of the Brooklyn Bridge, Mary J Shapiro, date unknown