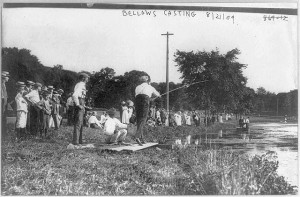 Of all the curious events to ever happen at Madison Square Garden — from the first one to the latest — no competition seems more surreal to me as a spectator sport than watching somebody fish. But in fact, for many years, Madison Square Garden II had quite popular fly fishing contests, either on their own or as part of elaborate hunting and fishing extravaganzas, the Bass Pro Shops meets Disneyworld.

The luxe, new Madison Square Garden, designed by Stanford White, was equipped with its own aquatic tank for water polo events, but in sporting season, it was apparently used for fishing events as well. The arena was obviously dressed up to resemble the ‘great outdoors’. In a tournament in 1911, an artificial mountain and waterfall were even designed as casting sites. The following year promised “so complete will be the change in the appearance of the amphitheatre that it will be hardly recognizable.” [Times]

For the fishing competitions, there was both ‘dry fly-casting’ using distance and accuracy markers, as well as the naturalistic kind, immersed in these natural dioramas.

And the leader of this sports was apparently one R.C. Leonard, who set a record for fly casting for black bass – at 101 feet and 6 inches — at the very first indoor fishing event at MSG, on March 15, 1897. He was still setting records as late as 1905: “He made the most notable cast that has ever been seen in the Garden,” according to the Times, breaking a distance record that he himself had set a few years previous. When Leonard made this “most notable” cast, the “rubber frog” hurled over the end of the 130-foot tank and hit the decorative “rustic bridge”!

Leonard might have met his match many years later in 1911 — in the form of a four-year-old girl. If ever a novelty act existed, it was Madge Seixas, a tot with an impressive arm, “having a mark of forty-five feet with a fly rod weighing about four ounces.” She climbed the fakemountain, situated on the Park Avenue (Fourth Avenue back in the day) side of the auditorium, and “insisted upon casting into the waterfall.”

Fishing was only one of several curious displays honoring the great outdoors. As part of an annual Motor Boat and Sportsmen’s Show festival, the 1905 event also featured canoe races at the Garden on a makeshift lake, and a whole hunter’s paradise — tent, camp fire and all, with a recently killed deer suspended from a tree and other game dangling from other faux foliage. In addition, there was a shooting range for schoolboys.

Incidentally, the New York Boat Show, held just a few weeks ago at the Jacob Javits Center, traces its lineage back to this 1905 convention.