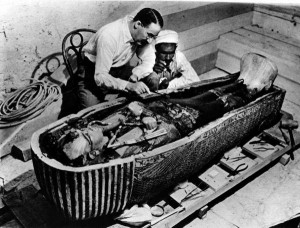 Years after the Steve Martin novelty hit, King Tut mania returns to New York City. The heavily hyped Tutankhamen and the Golden Age of the Pharaohs finally opened last week at the Discovery Times Square Exposition, promising rooms of priceless artifacts from the tomb of the young Egyptian king.

British archaeologist Howard Carter opened the tomb of King Tut in February 1923 and spent the year investigating the treasures within, even as legend of the ‘curse of King Tut’s tomb’, fueled by the mysterious death of Carter’s financier Lord Carnarvon, electrified the press.

A disagreement with the Egyptian government in 1924 grounded work on the excavation. So in the interim, Carter decided to take news of his discoveries on the road — and started in New York City.

Arriving on the ocean liner Berengaria in April, Carter took to a round of lectures throughout the city. Carter was caught off guard by his reception, finding himself “celebrated and adulated like a star.” And although his proper British diction and inexperience at public speaking turned off a few naysayers, his tales, helpfully illustrated in photos by Met photographer Harry Burton, ultimately helped spark the interest in his discoveries and in Egyptian culture.

He began with with a couple invitation-only discussions at the Waldorf-Astoria for the Metropolitan Museum of Art, an unflagging collaborator with Carter for many years. In fact, the Met’s assistant curator Arthur Mace worked with Carter at the dig and would allegedly fall victim to the curse in 1928.

Carter then presented to a larger audience in a series of four lectures at Carnegie Hall, the first on April 25, 1924. In a venue better known for dynamic musical performances, Carter was still able to pack in over 2,500 people and a madly fascinated press.

According to the Times: “Step by step, he led them to the point where the cover was lifted off the great stone sarcophagus containing the mummy of the Egyptian monarch interred 3,300 years ago.” 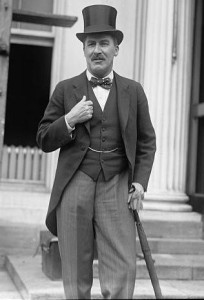 For a week in April, dusty Howard Carter became one of the most toasted men in New York City. He spent his days in the city traveling to other venues to share his work — one at the Museum of Natural History, two separate functions at the Brooklyn Academy of Art, and more appearances at Carnegie. At night, he was feted at private dinners.

He carried that enthusiasm with him throughout the country, hitting stops in New Haven, Pittsburgh, Baltimore, Philadelphia and Chicago. He even swung by the White House to have tea with President Calvin Coolidge. (The picture at right is Carter taken at one of these locations, May 1924, courtesy LOC)

Carter left New York for England on the Mauretania in July 1924 and eventually resumed work on the tomb. He took with him Met Museum photographer Harry Burton, who documented further exploration of the dig, providing the most startling and iconic images of the world’s most famous mummy.

The Met would continue to involve itself with the discoveries, and in the 1970s organized its best-known tour of the United States, which culminated in the Met’s own hallways in the winter of 1979.

As for the ‘curse’ of King Tut, you might be interested in reading a 1978 article in New York Magazine about the Met’s 1979 show and the allegations — by no less than their former director Thomas Hoving — that the Met might have used Carter’s appearance as a ‘cover’ to obtain stolen art from the tomb.