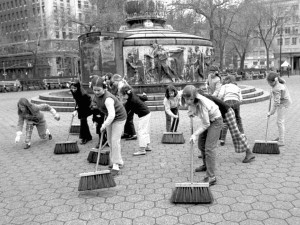 Earth Day 1970: Girls in Union Square take a sweep at pollution. Photo courtesy AP and National Geographic (who has many more pictures of the environmental holiday’s first year

Coney Island’s Luna Park will return next month! Or will it? [Kinetic Carnival]

Herald Square in the 1950s, gazing up from Greeley Square. Worth noting are the funky, clownish-looking taxicabs. [Ephemeral New York]

And President Obama speaks at Cooper Union today on financial reform. Listen to our podcast on Cooper Union [find it here] to discover what other presidents have spoken here.

1 reply on “History in the Making: Earth Day Edition”

I’m sure those women are glad to know that the area they’re sweeping has become a lawn!