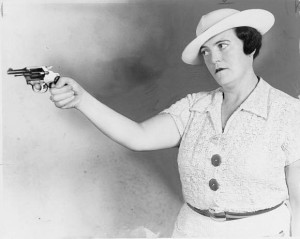 While perusing through the Library of Congress archive, I found these arresting images from 1937. Caption: “Mary A. Shanley, New York City detective – “pickpockets’ captor fears that she might look tough”

“Detective Mary Shanley is a sure shot, as two pickpockets who tried to get away from her know to their sorrow. Here she is with a regulation police revolver, and, below, drawing it from an innocent looking white patent-leather handbag. Miss Shanley can smile with the best of them though and doesn’t think cops should look like cops.” 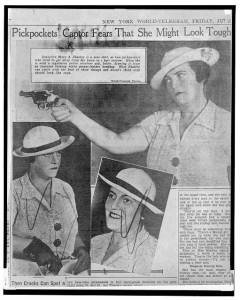 Shanley was known for catching pickpockets and ‘seat tippers’, thieves who specialized in theater crimes. According to authors James Lardner and Thomas Reppetto, the Irish dynamo once tried to stop a felon right in front of St. Patrick’s Cathedral by shooting her gun in the air.

Apparently, things don’t end well for Miss Shanley. According to a 1941 New York Times article: “WOMAN DETECTIVE IN BRAWL DEMOTED; Mrs. Mary A. Shanley Fires Shot in Barroom After Drink Is Refused.” She was apparently off duty when she fired off her revolver. 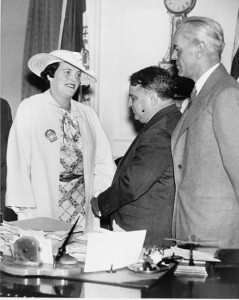 All pictures courtesy Library of Congress

I’m what, six years late on this? But things actually didn’t “end” for her when she was demoted– she worked her way back up to detective and continued with her career. She also once singlehandedly stopped a would-be shooter in a Macy’s.

Mary Shanley is my great aunt. My mother posed as her daughter many times to resemble a typical mother-daughter team while Detective Shanley “shopped” for shoplifters in Macy’s. It worked.
Aunt May, as we called her, was a larger-than-life character.