PODCAST We’re playing Good Cop / Bad Cop this week, as we take a close look at four events from the early history of the New York Police Department. You’ll meet shining stars of the force like Jacob Hays, who kept the peace in the early 19th century armed with a mean billyclub — and the only man to ever hold the title of High Constable of New York. And then you’ll encounter Joseph Petrosino, the Italian immigrant turned secret weapon in the early battles against organized crime.

Not all the early men in blue were so recommendable. During the Police Riot of 1857, cop turned against cop while the city burned and “Five Points criminals danced in the streets.” And finally there’s the lamentable tale of officer Charles Becker, the only member of the New York Police Department to be executed for criminal misdeed.

But did he really commit the crime — commissioning the murder of a nervous gambler who was prepared to rat him out?

#1 The Saga of High Constable Hays
Imagine encountering this face on a gaslit street at night! Jacob Hays watched over the streets of New York for over 40 years, one of the most dedicated men ever to watch over the city. Hays would become one of New York’s best known — and most feared — men, thanks to his agility with a billy club and his early skills of detection and crime solving. (NYPL) 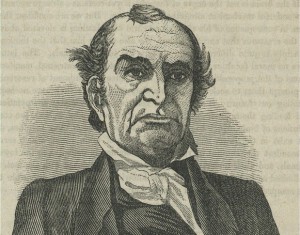 This is the corner of Broadway and Grand Street in 1818. A wildly bustling street corner today, but quite a different story back in Hays’ day. The constable roamed over a much smaller city — this was at the northern outskirts — and a far different range of crimes. By 1818, he would have only had about a couple dozen officers in his employ, all of whom reported directly to him. (NYPL) 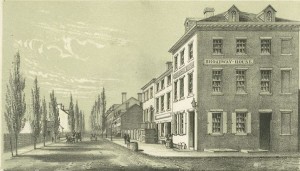 #2 The Police Riot of 1857
New York once had two different — and competing — police forces and boy they just did NOT get along. It all came to blows one June day in 1857, with state-sponsored Metropolitan police officers attacking the renegade men of the Municipal police force. 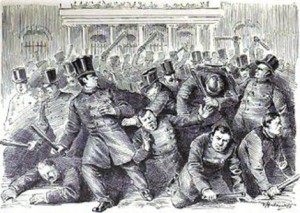 And it was because of Fernando Wood, the crafty mayor of New York in the 1850s who refused to comply to the state’s authority over city law enforcement. Wood used the police for his own political advantage and hastened its descent into corruption. 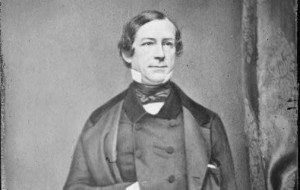 #3 Petrosino!
The short Italian immigrant Joseph Petrosino, who become the NYPD’s most potent tool against the growing forces of organized crime during the first years of the 20th century. 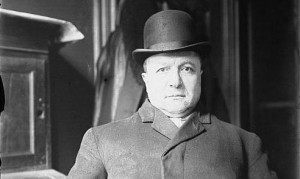 Petrosino was assassinated in Italy by the mob and his funeral procession through the city drew thousands of mourners. Today, you can visit the freshly refurbished Petrosino Square at Lafayette and Kenmare streets and see many artifacts relating to Petrosino at the New York City Police Museum. 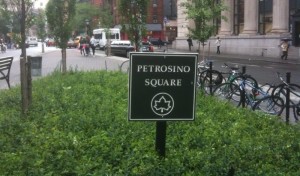 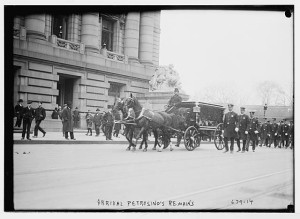 #4 Murder At The Metropole
Charles Becker and his wife beaming to the press, although I don’t know what they’re smiling about. Becker was convicted of authorizing the murder of down-and-out gambler Herman Rosenthal. The disgraced cop was eventually sent to the electric chair. 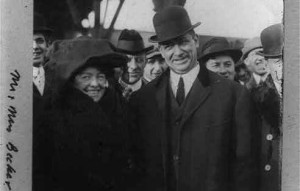 The prime witness against Becker was the otherworldly looking Bald Jack Rose, who claimed to have intimate details linking the officer to the vicious crime, which took place outside the Metropole Hotel in midtown. 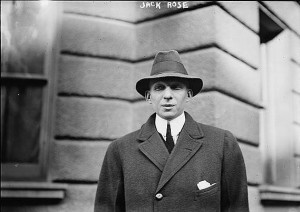 Two of the gunmen in the Rosenthal murder, nicknamed Gyp The Blood and Lefty Louie, pictured here with the men who brought them in. 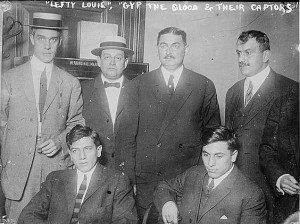 I wish the first three tales had full-length histories as good as Mike Dash’s Satan’s Circus, which recounts the excrusiating tale of Herman Rosenthal’s murder and Becker’s arrest. The Becker story is actually recounted in several books, including a fairly recent one by Rose Keefe called The Starker: Big Jack Zelig, the Becker-Rosenthal Case, and the Advent of the Jewish Gangster.

CORRECTION: In referring to the new components of the Metropolitan Police, I mention the ‘city of Richmond’ when I meant the ‘county of Richmond’ — aka Staten Island.

I recently found your podcast via this episode when searching for information on the NY Police Dept.

I’ve started compiling my family’s travails in NYC on my own blog – including one extremely coincidental item when I believe I found my great grandfather in a photo in the book “The Irish in New York.”

I’ve been working my way back in your archives on my daily commute and you have given me much context – so, Thanks!

I just learned that my great uncle, Louis Goldstein was a Seargant in the Boy Police of New York City in 1915. I can’t seem to find anything about a youth division of NYPD. Does anyone have any information regarding this group or of Louis Goldstein being part of it?