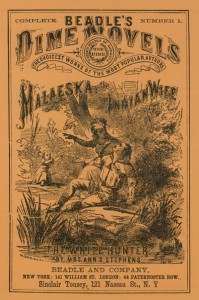 Today marks a big literary milestone of sorts. Serialized Harlequin romances, comic books, cheap paperbacks and pulp magazines filled with tales of gangsters and spies all trace themselves to the ‘dime novel’, a cheaply produced, cheaply bought publication of the mid and late 19th century, introducing breezy, far-flung tales to readers of lower classes. Although at first these items were mere reprints from newspapers, the form soon took on a life of its own, expanding with original stories and helping create the conventions of virtually every major adventure and action tale in its wake.

The very first of this mini-books was published today, June 9, 1860, 150 years ago, the amazing tale of Malaeska, the Indian Wife of the White Hunter, 128 pages of Hudson River Valley drama written by Ann S. Stephens, a 19th century serial writer whose breathless stories would define the genre and, by extention, the story trappings of the 20th century pulp genres.

Stephens’ sad tale recounts the illicit affair between a hunter living in Manhattan and a Mohawk woman. Their bi-racial child ends up living in white culture, while Malaeska is first made a servant and then banished. I’ll spoil the ending for you: when Malaeska confronts her son about his heritage, he responds by leaping off a cliff to his death.

You can read the novel’s entire content here hosted by Northern llinois University Libraries. The novel’s first run alledgedly sold over 300,000 copies. To put that into perspective, Uncle Tom’s Cabin, possibly the most influential American novel of the 19th century published just a few years before, sold that amount in its first year. 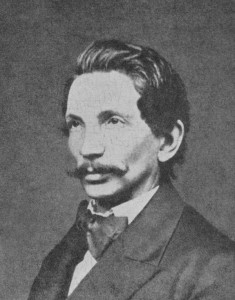 The experimental novel form was produced by Irwin P Beadle (at right), a publisher who collaborated with several partners (notably Robert Adams, George Munro, and Beadle’s own brother Erasmus) through the 1890s in producing hundreds of pop publications, including songbooks and weekly newspapers. But it would be the ‘dime novel’ which Beadle would both coin and prosper from, planned and produced from Beadle’s offices on William Street, first 141 William, then down the street at 118.

‘Malaeska’ would shortly be followed by such titles as ‘Myra, The Child of Adoption’, ‘The Slave Sculptor’, ‘Chip, The Cave-Child’, and many, many more titles sure to ruffle today’s modern levels of political correctness.

That is so cool. Long live the dime novels! Thanks for all your posts. I love old NY and its rich history.