Are you tough enough to mess with them?

PODCAST Extra! Extra! Joseph Pulitzer and William Randolph Hearst vs. the newsboys! Pandemonium in the streets! One hot summer in July 1899, thousands of corner newsboys went on strike against the New York Journal and the New York World. Throngs filled the streets of downtown Manhattan for two weeks and prevented the two largest papers in the country from getting distributed.

In this episode, we look at the development of the sensationalist New York press — the birth of yellow journalism — from its very earliest days, and how sensationalism’s two famous purveyors were held at ransom by the poorest, scrappiest residents of the city. The conflict put a light to the child labor crisis and became a dramatic example of the need for reform.

Crazy Arborn, Kid Blink, Racetrack Higgins and Barney Peanuts invite you to the listen in to this tale of their finest moment, straight from the street corners of Gilded Age New York.

Printing House Square, in a print from 1866, and the world of newspaper publishing in the mid-19th century. This was the heart of journalism in New York, where the streets reeked of ink, reporters and editors darted back and forth from their offices, and newsboys gathered to pick up their morning bundles of hot-off-the-press editions. (NYPL) 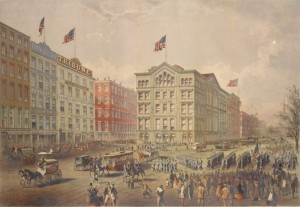 From another angle (print is labeled from 1870s) we see the offices of the Trubune, the Times and the World. The New York World at this time was under publisher Marble Manton was disreputable and unsuccessful. 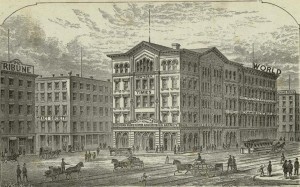 The fate of the New York World was transformed when it was purchased by innovator Joseph Pulitzer, who modernized the publication — introducing such staples of cover photographs and banner headlines — and increased its popularity through sometimes sensational articles. (NYPL) 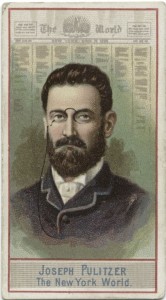 Not to be outdone, William Randolph Hearst stepped into the publishing fray in 1896 with the New York Morning Journal, matching the World head to head in pulling out the stops to increase circulation and ad revenue. 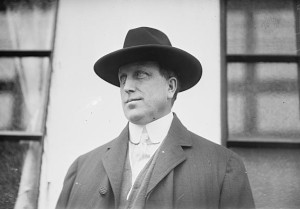 This is Duane Street in the early 1900s. I’m including this picture because the Newsboys Lodging House, where many of the strikers resided for a nickel a night, was located at 9 Duane Street, in the shadow of the World’s distinctive tower. 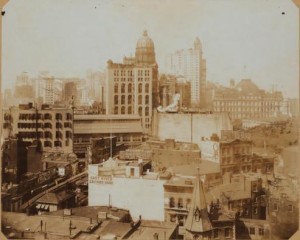 Pulitzer’s World Building from Park Row, designed by George Post, was at one time the tallest building in the world. It sits near the Tribune building, at center. 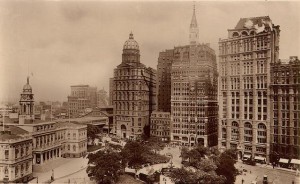 Newsboys were not the ‘plucky’, can-do ambitious entrepreneurs that pop culture has made them out to be, although sometimes (like this guy) they come close. 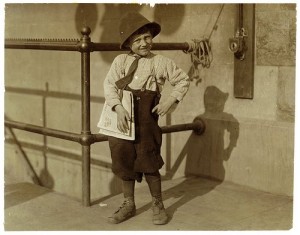 A Lewis Hine photograph with the caption “Group of newsboys starting out at Brooklyn Bridge early Sunday morning.” The newsies got up every morning to pick up their bundle of newspapers. New York newspapers raised the price of these bundles during the Spanish-American War, when circulation increased. When the war was over, many newspapers lowered the price. All but the World and the Journal. [NYPL] 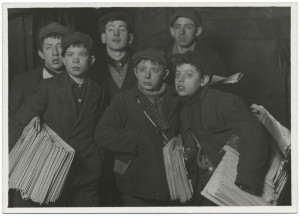 A cluster of newsboys, amongst sailors and businessmen, out at the Brooklyn Navy Yard, 1903. Brooklyn newsies had taken on the newspapers via a strike as far back as 1886 and joined their Manhattan counterparts in fighting back at Pulitzer and Hearst.(Courtesy Shorpy, who has a beautiful larger version) 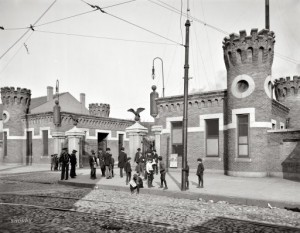 The life of the newsie aged children prematurely. Getting up early, staying up late, most of them homeless and scrounging for nickels and dimes to survive, the 19th century newsboy got by on emulating adulthood. The boys below were photographed by Lewis Hine in St. Louis. (from Shorpy, who have a larger view) 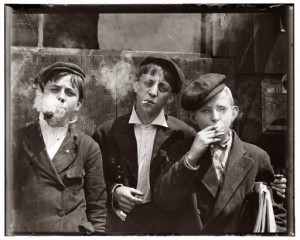 Hine and Staten Islander Alice Austen are the two most well-known photographers of everyday life in New York and captured life on the streets in all its unglamorized tarnish. Below, Austen captures a newsie hard at work in 1906. 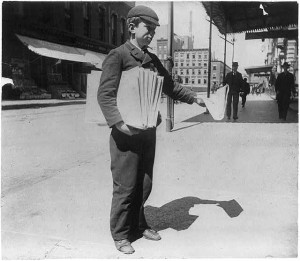 Although most newsies were boys, there were many newsgirls as well, such as this young lady in a fetching hat. Photo by Alice Austen. [NYPL] 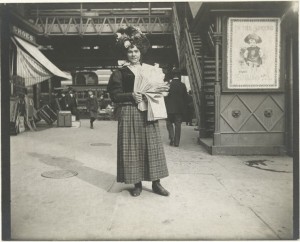 Even with aid organazations like the Children’s Aid Society and lodging homes for wayward waifs, many newsboys lived their entire lives on the streets. The picture below is from 1912, by Hine. (NYPL) 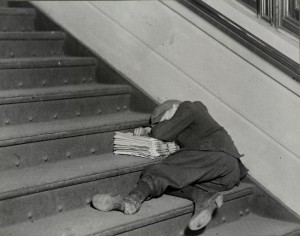 Why do photographs of young kids from this era seem to resonate so strongly? You can look at these pictures and see your own children, nieces and nephews and neighbors. As children — particularly poor ones– have few of the fashionable trappings of adults of this era, we’re able to recognize common expressions. I highly recommend checking out the collections of Lewis Wickes Hine and Alice Austen at both the New York Public Library Digital Collection and the Library of Congress.

Finally, here’s a one more photograph from 1943 of a modern newsie, decades after the strike, by another great photographer Gordon Parks (yes, the director of Shaft). I like that he’s standing in front of a sign for the Journal-American, the newspaper that Hearst’s Journal morphed into. 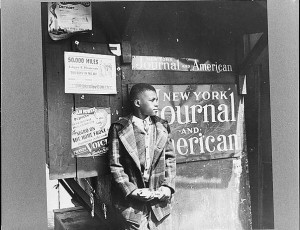 And I couldn’t close without a little nod to that oft-maligned, cult classic Newsies , featuring fictional portrayals of Racetrack Higgins, David Simmons and of course Kid Blink (in a reduced role from his actual participation in the strike) (Thanks to Pengo for the link suggestion)

Finally I deeply apologize: I’m sadly aware that my impersonation of a newsboy’s dialect had a bit of an Ozark twang in it! I was never meant for the stage, I guess….

And the World will know!

And The Journal too… Mr. Pulitzer have we got news for you.

help me how did they dress?

look at the photos

This was great. Newsboys were such a unique part of the the youth job force in the city. It was really interesting to learn more about the life style, history, and their amazing nick names!

Kids these days have no idea how good they have it…………..or do they? Anyway, these pictures were very interesting.

It’s more than that, they have forgotten why they have it so good. When their own parents are comfortable enough to vote against unionization, then it’s been too long for them to remember the horror. Everything is cyclical, and they will understand the loss of our unions and rights – give it about twenty years.

Our choices, here in this country, prove we are still big supporters of child labor and worker abuse. Every time you buy something made from a country like China than you show your support. No, it’s not easy to buy made in America or Fair Trade. But doing what is right is never easy. That’s why real change takes hard choices.

i love these storys because they show us that we dont have its so bads, does we huh. theys from my side of the states,Brooklyn is my town huh

Love this I like the idea of the strike. Even though I like the movie, but the history is just as important. CARRYIN’ THE BANNER

i love these storys because they show us that we dont have its so bads, does we huh. theys from my side of the states,Brooklyn is my town huh

[…] In 1898, publishers increased the price of a newspaper bundle to 60 cents because of the Spanish-American War. (The headlines were so dramatic then that it was easier to sell papers.) But after the war, when life went back to normal, two newspaper publishers did not bring their prices back down: Joseph Pulitzer (New York Evening World) and William Randolph Hearst (New York Evening Journal). At this high rate, newsies could not make enough money to pay for their lodging and their food, and in July of 1899, the newsies went on strike! […]

[…] staged a two-week strike that actually won them certain concessions from management. Read all about it!] Sources say itâ€™s the plain-drama version of the story that seventeen-year-old Christian Bale […]

[…] As Hollywood wasnâ€™t making non-animated musicals ca. 1990, Newsies wasn’t originally conceived as one: the screenwriters had instead proposed a straight-up drama based on the Newsboys’ Strike of 1899. [The what? (I hear you ask.)Â Well, Â back when the world was sepia-toned, journalism was saffron yellow, and the U.S. labor movement was a little red dot on the horizon,Â the kids who sold “papes” for Joseph Pulitzer and Wm. Randolph Hearst in New York City decided one summer that they were being gouged at the wholesale level, so they staged a two-week strike that actually won them certain concessions from management. Read all about it!] […]

[…] In 1898, publishers increased the price of a newspaper bundle to 60 cents because of the Spanish-American War. (The headlines were so dramatic then that it was easier to sell papers.) But after the war, when life went back to normal, two newspaper publishers did not bring their prices back down: Joseph Pulitzer (New York Evening World) and William Randolph Hearst (New York Evening Journal). At this high rate, newsies could not make enough money to pay for their lodging and their food, and on July 21, 1899, the newsies went on strike! […]