Today is the anniversary of undoubtedly one of New York’s most tragic events, a disaster that famously eradicated a neighborhood and became the city’s single largest loss of life in the 20th century — the explosion of the steamboat General Slocum.

SInce the invention of the steamboat, New York Harbor has seen its share of steamboat disasters, often by technical malfunctions like exploding boilers or sometimes by collision. But what took the Slocum on the morning of Wednesday, June 15, was a problem that faced many tenements at the time — inflammatory materials catching fire with little to almost no preventions in place. The blaze began in a room full of kerosene and hay, its initial discovery by a child was ignored by the captain himself, and, when it was taken seriously, all available tools to fight the blaze — hoses and buckets — were rotted through and virtually useless.

When passengers tried to flee, they discovered that the life vests were old and disintegrating and rafts were merely decorative. Regular inspections of the boat’s safety equipment had in the past been paid off in bribes; the result now manifest itself in a fast-burning ship with 1,342 passengers unable to escape.

The unlucky were the mostly women and children congregants of St. Marks Lutheran Church, in New York’s Kleindeutschland (today, the heart of the East Village), the vibrant destination for new German immigrants, seeking solidarity and a friendly, recognizable culture in the new, foreign city.

Being a day excursion, most of the men were off at work, and their families were off to enjoy a daytrip picnic at Eatons Neck along Long Island’s north shore. The Slocum never made it out of the East River however. The fire spread with such horrifying speed that I can only illustrate it the following way — the boat left the 3rd Street Pier at 9:30 and less than an hour later, its smoldering hull ran ashore at North Brother Island, most of its passengers either burned alive, choking from smoke inhalation along the shores or drowned in the waters of the East River. According to author Edward O’Donnell, “At 10:55 a.m., even before the news of the disaster became general, the burning hulk that had been the General Slocum was raised by the incoming tide and set adrift.”

Below: Recovery workers scour the banks of the East River for days afterwards, looking for additional bodies

The tragedy sent the city into mourning. For the residents of Kleindeutschland, the disaster was simply too much to recover from. Of the 1,021 women and children who died, most lived in the German district of the Lower East Side. Their husbands and other family members moved on to other German neighborhoods, up to Yorkville or out to thriving districts in Queens and Brooklyn, or out of New York entirely.

Remnants of Little Germany can be found all throughout the East Village and Lower East Side, but for a memorial to the Slocum disaster, visit the original St. Mark’s Evangelical Lutheran Church on East Sixth Street.

Below: A funeral procession passes Avenue A and Sixth Street, the ‘burial of the unidentified’ according to the caption 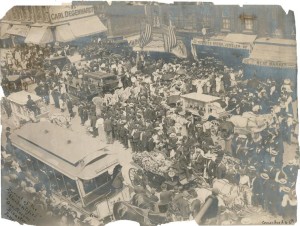 […] I won’t depress you with the full story here. I know from my 2009 blog about the war in Afghanistan that people don’t like reading sad blogs. Suffice to say that 1,021 people died either by fire or drowning that day, with only a few hundred surviving. Those with a further interest should read this New York Public Library piece, or listen to the Bowery Boys excellent podcast. […]

[…] Those with a further interest in this story should read this New York Public Library piece, or listen to the Bowery Boys’Â excellent podcast. […]