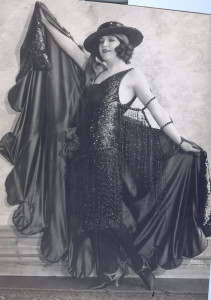 Above: Karyl Norman welcomes you to the Pansy Club!

The moral crusaders who succeeded in banning alcohol sales via the Eighteenth Amendment must have wondered where it all went wrong. Instead of ushering America down a path of productivity and moral fortitude, Prohibition sponsored a decade of unwritten rules, creating a shadow economy and empowering a criminal underworld.

Norms were upended, and the fringes of New York were defined by experimentation and playful risk. Harlem and Greenwich Village became the centers of culture, women found new avenues for empowerment, and black musicians mixed with white to create the sophistication of jazz.

It’s in the light of this churning mix of invention that you have to approach one curious fad of the Prohibition era — the pansy craze, an appreciation of drag-queen worship cultivated in the heart of Manhattan.

I’m not sure a place called The Pansy Club would be popularly received today, but when it opened in late 1930 it was risque and cool. Its location at 48th and Broadway planted it firmly in the theater district where it truly belonged, of course. But given the entertainments it generously offered, it’s amazing to me it was allowed to open at all.

It makes sense that the speakeasy-fueled, white crowds, having fully sampled from black nightclubs of the 1920s, would venture into other subcultures on the fringe of bohemia. There were plenty of places in Greenwich Village for gay and lesbians to meet, and within them came camped-up forms of cabaret, with men in drag emulating the glamorous female stars of the day. It helped that some of those stars, like Sophie Tucker and Mae West, mixed with and borrowed from their costumed admirers.

It all built into a national, urban ‘craze’ in 1930 and 1931 for drag shows in a mainstream cabaret environment.  Why it neatly fit on the nightclub circuit — and what made it somewhat more tolerable for conservative crowds — was partially due to drag’s close association with vaudeville.  Although the term ‘pansy’ was a derogatory one for gay men, for this brief time ‘pansy clubs’ were the hottest ticket in town.

The Pansy Club, at 204 W. 48th, in heart of Times Square (and about where the M&M Store is today) was not the only nightclub of this type, but when it opened the week before Christmas in December 1930, it was the showiest of the lot.

The Pansy Club featured standard-era vaudevillian and cabaret acts, but with a decided gay (read: scandalous) twist — female impersonators, “a bevy of beautiful girls in ‘something different’ entitled ‘Pansies On Parade'” according to a newspaper advertisement, one of the few documents that verify the club’s brief existence.

Mistress of ceremonies was one Karyl Norman, known in drag as the ‘Creole Fashion Plate’. Born George Peduzzi from Baltimore, Norman became a star on the vaudevillian circuits in the US, Europe and Australia in a show that featured him both in and out of drag. As a published songwriter and a favorite of Tin Pan Alley, Norman would have been a big draw in 1930 and as a seasoned vaudevillian star would have brought a touch of credibility to a club with so shocking a theme. 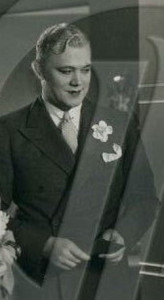 According to Brooks Peters, the club was also “a haven for aging flappers and party-goers who liked â€œslumming.â€”

Down the street was an even more popular draw. At Club Abbey (46th and 8th Ave) was a young Jean Malin (at left, courtesy Flickr), a Brooklyn-born wit and sometimes ‘female impersonator’ who hosted drag performances while charming audiences with interludes that made no disguise of his homosexuality.

What distinguished these places is that they were not considered gay and lesbian bars of the sort in the Village. However they did have a similar thread in common with them — ownership by the mob, an association that led to the club’s swift closings.

A gang shooting closed Club Abbey in January, and the police raided the Pansy Club that same month.  While the ‘pansy craze’ would live on in other cities — it made a more lasting impression in Hollywood, naturally — it retreated to the fringes again in New York.

And finally, for your Friday night celebration, here’s a look at Jean Malin, who made a brief appearance in Hollywood films before Malin’s untimely death in 1933. The film is ‘Arizona To Broadway’.

3 replies on “Welcome to The Pansy Club: leave your wig at the door”

I recently produced a two-hour radio documentary on the music and story of the Pansy Crazy, your chance to hear these pansies!
at
http://www.queermusicheritage.com/may2010.html

I recently produced a 2-hour radio documentary on the music and story of the Pansy Craze, your chance to hear these pansies! at
http://www.queermusicheritage.com/may2010.html