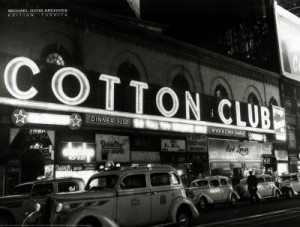 For our second entry, we’d be amiss if we didnt feature the grand-daddy of New York nightclubs, one of the longest (non-contually) operating names in the United States and a place that literally changed music history — The Cotton Club. Formerly at Lenox and 142st, the club was the ‘aristocrat of Harlem’, typifying the very best and very worst parts of African-American life at the beginning of the 20th Century.

Ten years after legendary boxer Jack Johnson stirred up America’s racial tensions by becoming the first black heavyweight champion and victor of the ‘fight of the century’ in 1910, he bought a ramshackle Harlem casino and opened up Club De Lux. It may have had a few successful years and closed quietly had Jack not sold the club then to notorious gangster Owney ‘The Killer’ Madden, who was looking for a venue to sell his beer.

Nobody came to the Cotton Club for the beer though. Madden employed the best young black talent that New York had to offer. His first hire was a young Fletcher Henderson, and the house band was directed by a then-struggling Duke Ellington, who wrote exotic stage shows with wildly dressed chorus girls. One such chorine, Lena Horne, gave her first solo performance there. Other luninaries who shared the stage there included Cab Calloway, Ethyl Waters, and Dorothy Dandrige.

The horrible irony, as with many clubs of the ’30s, is that the performers were mostly black, while the audiences were white-only. The audiences preferred exaggerated “black” shows, and even Ellington was forced to pen spectacles set in jungles or plantations, with performers acting in absurd stereotypes. 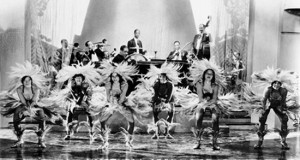 As Madden seemed to be directing most of the Cotton’s affairs from his cell in Sing Sing prison, Broadway producer Walter Brooks was brought in to front the place, and managed to bring in a few white songwriters like Harold Arlen and Cole Porter to collaborate with the black entertainment. On Sunday night ‘Celebrity Night’, various New York luminaries like Jimmy Durante and Bing Crosby would leap from their martini-topped tables to the stage to perform impromptu numbers.

The club entered national prominence when the Columbia Broadcasting System (CBS) began broadcasting the club’s entertainment to listeners around the nation.

The club moved downtown to Broadway and 48th Street in 1926, but eventually closed in 1940. A new incarnation opened back up in Harlem in 1978 and still operates today, recapturing as best as possible the excitement and real talent of the original Cotton.

Most people outside New York probably know the club best by the Francis Ford Coppola movie of the same name, however several revues were filmed here during its heyday, and the Cotton Club Orchestra as directed by Cab Calloway or Duke Ellington would clearly make a deeper impression onto vinyl. The recordings would help define the face of jazz music. 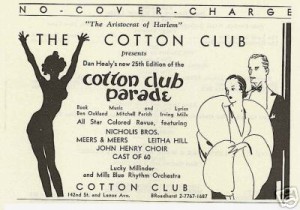 Is it just me, or was the child-friendly cult classic, Bugsy Malone, starring Scott Baio and Jodie Foster, filmed at the Cotton Club?