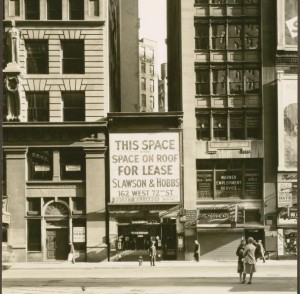 Above: 15 Park Row, today the home of J&R Electronics (between Ann Street and Beekman Street), photography by the Wurts Brothers (NYPL)

Slawson & Hobbs was a prosperous New York real estate firm. You can read about their new offices at W. 72nd Street here. That office building is still around — there’s a Cold Stone Creamery on its ground floor today — and turns a hundred years old this year.

Ah, even in a city so thoroughly studied, you can still find a little mystery under your nose — witness the “magical, frozen-in-time interior” 5 Beekman Street [New York Magazine]

Seventy-five years ago this year, the treasures of philanthropist Henry Clay Frick — not to mention his sumptuous Upper East Side mansion — opened to the public. [Gothamist]

One more vanishing sign on the Lower East Side [Bowery Boogie]

Staten Island husband and wife painters Adeline Albright Wigand and Otto Charles Wigand, once forgotten, get their due this week at an exhibition upstairs at the Staten Island Museum. [SI Live]

Ugh! And I just discovered this weekend that Brooks of Sheffield has ended his wonderful Lost City blog and not without a few last digs at the encroaching spectre of gentrification. “I wrote thousands of words, and posted hundreds of pictures for four-and-a-half yearsâ€”nearly 3,000 posts, all told. None of them made any difference. Not really.” [Lost City]