BOWERY BOYS RECOMMEND is an occasional feature where we find an unusual movie or TV show that — whether by accident or design — uniquely captures an era of New York City as well as any reference or history book. Other entries in this series can be found here.

Mix a dangerous, fenced-in set of crumbling ruins with the imaginations of children, and the result is an urban legend. Throw in a series of real-life events more horrifying than anything a child would ever dare to conjure, and you have ‘Cropsey’.

A chilling glimpse into some horrific Staten Island history, the documentary ‘Cropsey’, which briefly played at IFC Center earlier this month, is now available on Video On Demand on Time-Warner Cable. The film looks at a series of vile murders on Staten Island during the ’70s and ’80s and how they may relate to the closing of a disturbing old medical institution and at least one ghastly crime that may have occurred in its abandoned underground tunnels.

Cranking up the tinkling piano and effective Blair-Witch style photography of rotted buildings and dark forests, directors and Staten Island natives Barbara Brancaccio and Joshua Zeman present the murders and the subsequent capture of the suspect Andrew Rand through a veil of collected memory. Cropsey was the name of a generic killer figure — wielding an ax, or a hook hand, take your pick — woven by slumber-party storytellers and recounted to children. A basic urban legend, but rendered all the stranger for the events that actually did occur near the site of the Willowbrook State School, an institution for children with mental retardation in central Staten Island that was closed in 1987 due to wicked abuses to patients.

Below: Andre Rand in custody 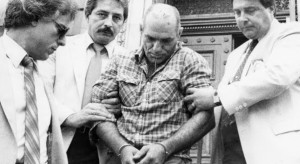 Today the ruins of Willowbrook stand as part of the Staten Island Greenbelt, fenced away and inaccessible. Rand was a former Willowbrook employee who lived on the grounds of the institution after it was closed, and was apparently not alone there. In 1987 when a young girl Jennifer Schweiger goes missing, Rand is taken into custody. Then investigators make a grisly discovery on the grounds of Willowbrook, leading to a host of unsolved cases of child abduction.

The film links together these disappearances from several neighborhoods and attempts to place them into the larger context of Staten Island history — the idea of the borough as ‘dumping ground’ for most of its modern existence, and a place developing against the grain from the rest of New York City. 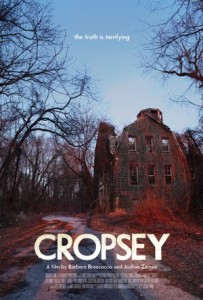 Along the way you get allusions to the Son of Sam murders and Satanic cults, accusations of necrophilia (!), bizarre handwritten letters from Rand to the filmmakers, and dated New York news footage with Ernie Anastos and Geraldo Rivera, all utilized to give you the serious creeps. “For my safety, I will not go on camera,” says a nun interviewed about a crazy Satanic cult. Like other assertions made in the film, the interview has little bearing on the case and is used primarily to concoct a spooky atmosphere.

The film brought back a lot of my own childhood fears; who didn’t grow up with similar ghost stories about an abandoned house in their neighborhood, a building left in ruin ripe for a fiction told by flash light? ‘Cropsey’ recounts true historical events — several disappearances unsolved to this day — with that same sense of chilling seriousness.

Catherine on our Facebook page had this review: “I saw a screening of this film… it’s a great topic that deserved a better treatment. They do a great injustice to the residents of the institution by repeatedly referring to them as mental patients, and do nothing to shed any light of fact on the urban legend. But if it piques anyone’s interest in the topic, then I guess it did a service.”

Look for ‘Cropsey’ on your cable’s Video On Demand listings. Click here for further information or on the official film website. Visit Forgotten New York to take a snow-covered tour of the Farm Colony ruins along side the main building at Willowbrook.

ok leave on Staten Island and my best friends mother worked in the Willowbrook “School” from the 70’s until about two years ago, (the new location was for older people only and it is a housing unit). I am curious to see the show on ID tomorrow night, I am also curious to see if they mention the fact that Th College of Staten Island is built on the property and that the tunnels run under the buildings and classes are held in the basements. The pictures i am seeing look more like abandoned SeaView rehab center on Brielle avenue.

i have watched the show on ID, and all through it it does not tell me why The name CROPSEY is being used. i know that my relation came from there and Jasper F Cropsey was an archetect and builder . But what does this have to do with our name?

Seems odd that these missing children and the poor little girl found partially buried sounds just like the Albert Fish murders that happened in the same place in the 1920’s and 30’s.

Thanks for the review! And thanks everyone for leaving such thought provoking comments! To get more updates on Cropsey, like our Facebook page http://on.fb.me/j3qBQn and follow us on Twitter @cropseylegend! Don’t let the boogeyman get you!

You didn’t want to be in Pouch Camp during this time–Cropsy would get you, at least that’s what we were told. This was a north shore thing–the south shore had another problem, a man who literally “hung out” in school yards acting “indecemtly.”

I first heard the story of Cropsey as a 10 year old boy scout from Bklyn in 1955. I moved to Staten Island in ’79 and knew Rand. He used to sweep up for Counttry Donuts in Heartland Village parking lot. Always looked strange. Everyone was freaked out when the story broke. So I’m looking for the Cropsey link.

I gew up in Brooklyn. Cropsie (or Cropsey like the Avenue?) was a well-known bogeyman as early as 1954, so clearly no connection to the Rand murders. Cropsie was a commonplace, including in day and stay-away camps that drew on Brooklyn kinds. I do not recall a connection with Staten Island. The idea was that Cropsie would “get you” whatever that entailed.

cant wait to check this out..its gonna be on CI on Foxtel in Australia soon..

I used to go to camp pouch as a kid and I always heard about the cropsey legend and how he murdered little kids. it scared the shit out of me back then and it still scares me to this day something like 20 years later