ABOVE: The Boynton Bicycle Railway, combining the best of the locomotive and the spinning wheel. This narrow little hot wheel took riders on a short ride through Coney Island.

For the third part of our Bowery Boys On The Go summer series, looking back at the history of New York City public transportation, it’s a short ride on the long gone, forgotten methods of getting around the city. The streets were mostly dominated by horse-based transport, but this was smelly and slow — not to mention awful on the animals. So the city experimented with new ways of moving the masses: by cable car (exported form San Francisco), the trolley and the monorail.

Along the way, you’ll find out the connection between the cable car and New York’s most famous art-house movie theater, discover the origins behind the name of a classic New York sports team, and hear the contributions of a man known as ‘the black Edison’.

ALSO: Find out about what may be the world’s worst monorail technology!

Horse Drawn: New York City before the 1870s simply could not have survived without horse power, and the streets were filled with thousands of the animals pulling streetcars, omnibuses, carts and basically everything else that moved. As a result, life for a horse was pretty much appalling. Life span was relatively short. Although the city designated places along the waterfront to dispose of carcasses, it wasn’t unheard of to leave bodies in the street. This classic (but disturbing) photo from 1900, captioned ‘Close of a Career’, illustrates the absurdity. (Courtesy Shorpy) 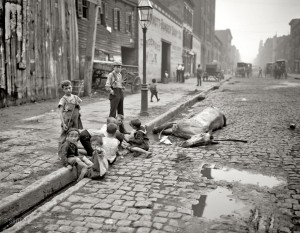 The first cable car system in New York was actually a steam-engine hybrid that ran over the Brooklyn Bridge in 1883. Engineers didn’t believe a regular steam locomotive could travel up an incline to get onto the bridge, so this dual steam/cable method was created. The powerhouses, pictured here, were situated under the approaches. (Read more about it here.) 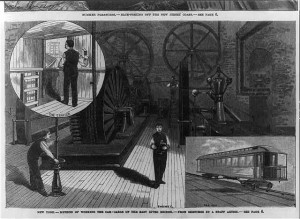 Cable Vision: How many times have the streets around Union Square been dug up? Here’s one of the very first times, in 1891, as workmen install a cable line for New York’s very first cable car system. Notable about this particular stretch is the fact that this would become part of the notorious Dead Man’s Curve, where cars would speed around the northwest corner of the park. (Courtesy NYPL) 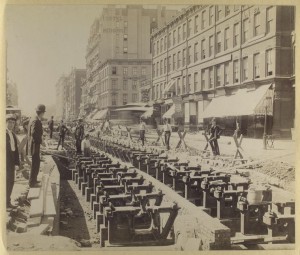 The frequent and frustrating traffic predicament on New York streets, a congested cluster of machines and horses, sometimes at a standstill. This picture, from 1892, depicts Broadway between Union Square and Madison Square. 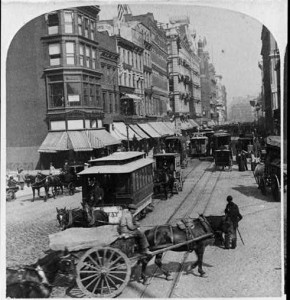 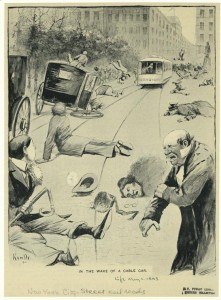 A video look at the Brooklyn trolley system, which by the 1930s had become the standard method of transit for most residents of the borough. 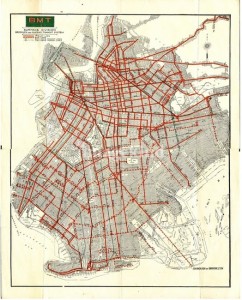 Inventor Granville Woods debuted his ‘multiple distributing station system’ — a sort of ‘wireless’ trolley system using electromagnetic induction — for the American Engineering Company in February 1892. Unfortunately, Woods had to sue the company for any sort of credit. In fact, this article in the Brooklyn Daily Eagle of the trial doesn’t even mention his name. 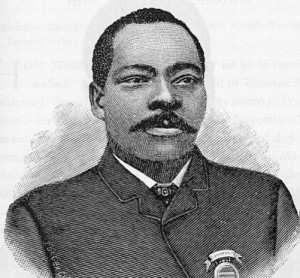 Monofail: The first riders of the monorail system provided by the Pelham Park and City Island Railroad were greeted with a nightmare voyage culminating in the entire car falling over on its side. “Flimsy Structure Supporting It Gives Way and Many Are Badly Hurt,” cries the New York Times. Despite this not insignificant hiccup, the monorail operated for a few years before being replaced with a trolley system. 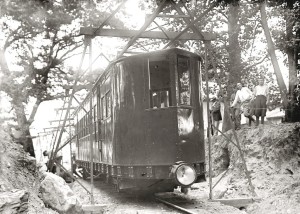 On Track: Looking down on Times Square from 1905, taken from the top of the Times Building. I’m putting this hear for a bird’s eye view on what the streets of New York looked like, grooved with trolley rails. You can still see several horse carts too, although most horses had been taken off of city streets by this time. (Please click on the photo for a close-up view) 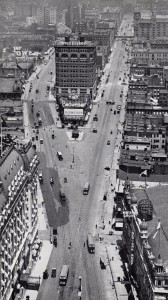 Real Sad, the lives of horses during those days. Ungrateful Mankind.

Horse drawn wagons saw a revival during the war years due to gas and tire rationing. Even the few gas powered Divco trucks used to deliver milk and ice saved gas in the long run because people only had to drive to the market once or twice in a month.

Trolley tracks still emerge from the asphalt here and there in Brooklyn. I’ve made lots of photos of them. And at Broadway and Houston is a building, on NW corner, that used to house cable-car engine, pulling the cables, etc. That’s actually a great building and a worth a visit inside; it has a big atrium with walkways circling it.

I used to have lofts in that building in fact around 1980, and I worked there as well so I had full access to every thing.
All of the machinery and steam engines that were in the 3 basements had long before been removed and scrapped.
I had an engineer’s log book detailing the installation of the 11 boilers and steam engines, but also how many problems there were on a daily constant basis with the actual cables breaking, fraying, coming off the guides etc. That was a big reason why the steam driven cable system was only in use about 5 years before it was converted to electric.
Shame the machinery wasn’t still there- it was larger and different than the SF system, there were four 1,000 hp Corliss engines, a 32 foot driving wheel, 11 high pressure Heine boilers
a large dynamo to produce the building’s electric. There was also a water operated freight elevator that was working untill at least 1982 that I know of.
The cable car company had their offices on the 8th floor right above my loft on the 7th, and there used to be a small wrought iron balcony on the 8th floor of the Broadway side that one could step out onto, it was removed somewhere around the 1920s and all traces of it erased.
The 8th floor restrooms were more elaborate than the others- marble and porcellain sinks supported with brass legs and lion claw feet, marble on the walls, oak, fancy brass coat hooks.
Most of the rooms in the rest of the building had a marble and porcellain sink and an oak wardrobe closet.

The entrance portico also once had two large stone columns, these were removed.
The lobby of the building was a 1960s renovation disaster with it’s suspended fluorescent lights and the walls and ceiling above them painted flat black, stainless steel doors and all glass doors replaced the originals.
Marble steps were concreted over, wrought iron railings to the 2nd floor were removed, a coffee shop with a roll up security gate was shoe-horned into a tiny space under the stairs by the elevators.
The upstairs hallways had most of their original oak doors and trim, but it had all been painted a dark seasick green numerous times. The hallway ceilings had wood and plaster mouldings, but mostly ruined by miles and miles of exposed conduit, telephone wires, water pipes and fluorescent lamps.
The tongue and groove flooring had all been buried under layers of cheap linoleum asbestos tile.
Back in the 80s the building basically rented out spaces to factories who made various garments, some offices, and some other use lofts. There was no heat after 5 pm or weekends, and there was no hot water anywhere, but I had a 1,000 sq ft loft on the corner with 6 huge windows on the 7th floor for $331/mo, at least untill the big chief Mr Glickman died and this new agent/manager came in named Saul Panoff came in and immediately doubled everyone’s rents, so mine went to $656/mo and then he added in a heating oil cost percentage surcharge too.
His outfit also owned the electric meters in the building, and I remember paying 25 cents a kwh for electric which was a total ripoff.

It would be great if that engineer’s log book could be reproduced and offered for sale.

What a fascinating article/pictures. Thanks

NYPL must have an error. The photo with trolley track being laid shows the Metropole Hotel in backgropund. That was on Broadway between 41st and 42nd Street.

I think those tracks are actually cable tracks. Note the groove in the middle for gripping the cable, and also there are no electric trollys to pick up electrical current.

Allan, I’m unsure which photo you’re referring to, but Manhattan had no trolley wires for its streetcars for they picked up their power from a buss under a slot in the centre of the road, thus outwardly almost indistinguishable from a cable car line’s installations. There are some indicators but indistinct fuzzy photographic reproductions may not show the differences well if at all. This was called a ‘conduit system’ and was also in use in many other municipalities but in the US of A, Washington DC was the primary other example.