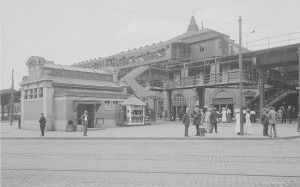 The first subway into Brooklyn — not a product of Brooklyn Rapid Transit (BRT), but of an extension of the original Interborough Rapid Transit (IRT) — terminated at what is today the Atlantic Avenue-Pacific Street Station, at the crossroads of several streets and a hub for the Long Island Railroad and a station for the Fifth Avenue Elevated. Although I doubt you would guess its importance by visiting the Chuck E Cheese or the Target store that presently inhabits the Atlantic Terminal Mall sitting around here today.

From another angle, in 1914 (pic courtesy NY Subway), you can see the interchange between several transportation methods, including horsecars and a line of trolleys: 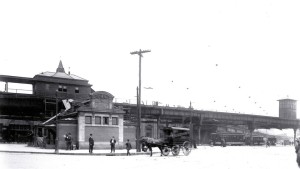 That decorative control house and former subway entrance standing out so conspicuously at the crossroads was designed by Heins and Lafarge, and its ornate design is similar to that of the Bowling Green IRT control house at the foot of Manhattan; in fact both were constructed at the same time to serve the same line.

This intersection of Fourth, Flatbush and Atlantic avenues was once known as Times Plaza, named in what I can only think of as wishful thinking after the Brooklyn Daily Times in emulation of Manhattan’s own Times newspaper plaza. The Daily Times folded less than thirty years later however. The entrance is lovely — and was renovated in the last decade — but was not very effective in the day, sitting as it does in the middle of a very bustling intersection. 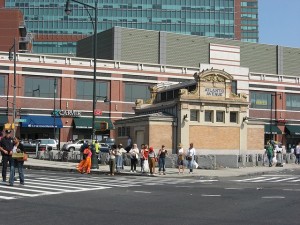 During World War I, a large electric sign hung over the plaza brightly illuminating the words FOOD WILL WIN THE WAR – DON’T WASTE IT.