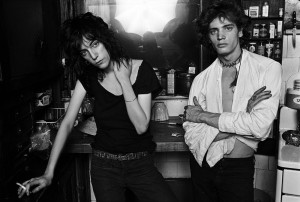 The National Book Award for Non-Fiction was awarded last night to a book loaded with gritty New York History — ‘Just Kids’, the lovely memoir by Patti Smith about her friendship with Robert Maplethorpe. If you’re a fanatic of Manhattan in the ’70s, it’s simply a must-read, from meandering along St. Mark’s Place to hanging out at Max’s Kansas City and, of course, the Chelsea Hotel. [The Atlantic]

Chef Boyardee used to work at the Plaza Hotel. How’s that for trivia?! [Ephemeral NY]

Brooks of Sheffield profiles one of my favorite restaurants in Cobble Hill, the rustic, no-frills Sam’s Restaurant. [Lost City]

And finally, just wanted to let you know that this week’s podcast will be delayed a few days. It will be available for download on November 24, 2010.

One of the reasons for the delay is that we made our television debut last night as guests on the Brian Lehrer Show, on CUNY TV. I’ll post the video when it becomes available later today.

2 replies on “History in the Making: Ain’t It Strange Edition”

The clip can be downloaded here for the ” Boys” TV Debut…its the first show…Good Jobs Guys !

Please correct:
The title is JUST KIDS, not Just friends. I really love your podcast and recmmend them constantly. PLease keep it up!