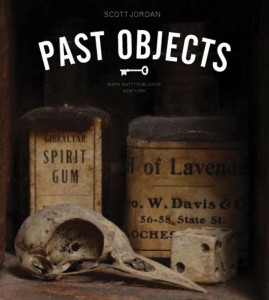 Much of our fair city is built on a foundation of yesterday’s trash. Studying an early map of Manhattan and comparing it to the island’s current shape reveals the city’s growth by landfill, a staggering — albeit slow and piecemeal — project as great as any superior monument or skyscraper. (From this view, you can easily see that the island has slowly expanded out into the water.)

Twenty-five percent of downtown Manhattan is reportedly landfill. Occasionally, it’s imported landfill; for instance, portions of the FDR are built over British war rubble from World War II. But for much of the early centuries of New York history, city builders used garbage and abandoned construction material to expand the coastline and fill up marshes, from discarded ships and carts to the every day items of city residents. That means a treasure trove of the past is underfoot, if you have the stamina to look for it.

Urban archaeologist Scott Jordan has been fascinated in what lies beneath since he was a kid growing up on Governor’s Island — a place largely comprised from landfill — and isn’t afraid to plunge into an 18th century privy to look for signs of the past.

His modest, charming look at this obsession, “Past Objects” recounts his passion for digging and lays out some of his finds for your viewing pleasure. It’s a soft-spoken book geared towards antique lovers and collectors, but you don’t need to know your 17th glassware to appreciate some of the more arresting finds here.

Among his found marvels include a glass water bottle from the Crystal Palace Pavilion in 1853, painted children’s plates and buttons from post-Revolutionary War garments. Images of clay and wooden piping may not be terribly interesting until you realize these were the first pipes, laid in the first few decades of British occupation. The beautiful, rainbow collection of old bottles are mostly from the late 19th century, the best one scooped out from Brooklyn landfill.
Jordan also appears to have the spirit of an outsider artist, with some reconstructed pieces made of compiled bits of pottery and doll’s heads. Nothing like a bunch of 19th century doll’s heads staring back at you, with old dead eyes!
He also recounts the events of one of his most death defying (and illegal) digs from 1984 under the Manhattan Bridge, where he was almost buried in a collapsing mud wall. Not every mound of dirt or excavated foundation will offer up such adventure, but after reading “Past Objects,” it’s hard not to walk by a construction site and wonder what evidence of early New York sits just below the surface.
‘Past Objects’, featuring photography by J.K. Putnam, is available from Mark Batty Publisher. Jordan’s website is at New York Artifact Art. You can also find him at the Columbus Circle holiday market through December 24.