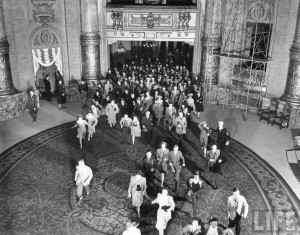 ABOVE: Satisfied New York filmgoers exit into the lobby, May 1943. WHAT lobby, pray tell? This is the massive 6,000-seat Roxy Theatre, at 153 W. 50th Street, “often cited as the most impressive movie palace ever built” according to Cinema Treasures. Movies at the Roxy were presented with live orchestras and vocals. In this case, the film was the Tyrone Power war thriller ‘Crash Dive’, accompanied by Jimmy Dorsey and His Orchestra and vocalists Bob Eberly and Kitty Kallen.

Ms. Kallen, by the way, is still alive; below, you can enjoy a comic-strip advertisement for Halo Shampoo where she was featured in 1954. The Roxy Theatre was torn down in 1960. Today you can eat at TGI Fridays right where these people are standing. See if they have any of Kitty’s hits on the jukebox! (Courtesy LIFE images)

Check out this extraordinary photo of the filming of the 1929 World War I picture ‘The Battle of Paris’, filmed at the old Kaufman Astoria Studios, across the street from where the Museum of the Moving Image stands today. [Greater Astoria Historical Society]

Meanwhile, the Village Voice does the same with the city’s 10 best restaurants in history. Riddle: Babbo is on the list, but not really. [Village Voice] 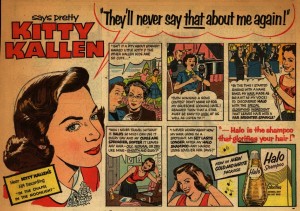 2 replies on “History in the Making: The Roxy Theatre and Kitty’s hair”

Seems like they’re not exiting, but entering… to me it looks like some are running into the theatre to grab good seats.

You are right. They are ENTERING. I know because I worked there as a teenager on the candy stand zzzzz9yet to come) in this “Rotunda” and looked at it every evening. That is the ENTRANCE from outer lobby you see in the picture.