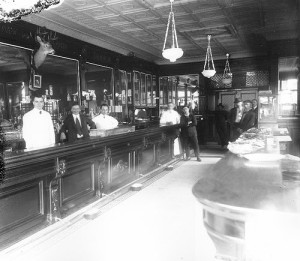 I love this picture. There are so few century-old images of actual saloons that look like places you’d actually want to go into. This image, from 1905, of a handsome bar and its attentive staff was taken in College Point, Queens. Notice the beautiful cash register, the deer head overlooking any patrons and the food spread on the right.

College Point, a mid-19th century destination for German immigrants, was a village developed by industrialist Conrad Poppenhusen, an early producer of rubber products for Charles Goodyear. It was also home to many late, great breweries, and the combined smell of rubber and beer must have been something else.

Photo courtesy the Queens Borough Public Library. They have several more College Point photos from 1905 in this Flickr photo stream.
——– 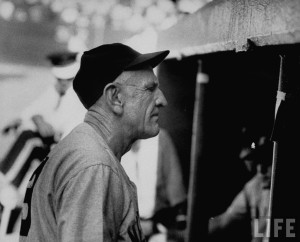 Casey At Bat: The title of the Museum of the City of New York’s upcoming tribute to Casey Stengel “The Greatest Character of the Game” is not an exaggeration. A typical Stengel aside: “All right everyone, line up alphabetically according to your height.” More crazy quotes will be thrown out by a panel of baseball historians and Stengel fans this Thursday 6:30 PM. Say you’re a Bowery Boys listener and get the member’s discount on admission! [Museum of the City of New York]

What was the name of the bar that the top photo was take in?