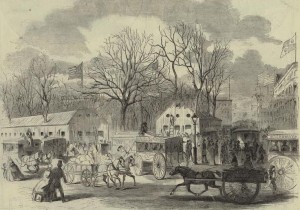 By the middle of May 1861, almost a month into the Civil War, most New Yorkers still swelled with enthusiasm for the Union cause, demonstrated at the great rally in Union Square just a few weeks earlier. Since that historic gathering, the streets were regularly filled with parades, rallies and general cries of support for President Lincoln.

Many sons and fathers rushed to join volunteer militias, most notably the brightly uniformed New York Fire Zouaves of Colonel Elmer E. Ellsworth. By the end of May 1861, the Zouaves would become the first Union regiment to capture a city in Confederate territory with their invasion of Alexandria, Virginia.

I think it’s important to remember that, even by May 1861, this new war was already making a physical transformation upon the city. The illustration above, from Harper’s Weekly, is of temporary barracks in front of City Hall, built to accommodate gathering troops from New York and beyond. (You can see City Hall towering in the background.) More troop accommodation would soon be built throughout the city.  One account describes, “great barracks built in Battery Park, consisting of an officers’ marquee and a large number of tents.”

By 1862, when it became clear that the conflict would not reach a swift resolution, the city removed all temporary tents and barracks from public parks but left the structures in City Hall Park intact.