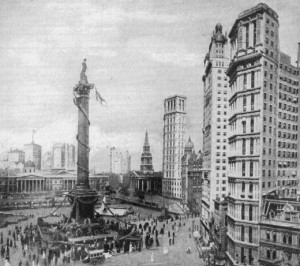 Trafalgar Square, by way of Park Row, in an imagined universe of American domination

“If London Were Like New York” — as this 1902 article from Harmsworthâ€™s Magazine imagines — it would be twenty times more spectacular. [Lubin] (Thanks to Chris Perriman for sending this via Twitter)

A walk down Jamaica Avenue in Queens. I bet you didn’t know you could find the home of a Founding Father still standing there. [Forgotten New York]

When New Yorkers went old school: The Museum of the City of New York celebrates the city’s role in popularizing Colonial Revival architecture and design in their new show “The American Style: Colonial Revival and the Modern Metropolis,” which opens next Tuesday. [MCNY]

There were New York restaurants for vegetarians — in the 1930s? [Ephemeral New York]

Music videos from the 1980s filmed in Greenwich Village. ‘Nuff said. [Off The Grid]