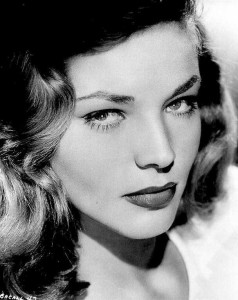 The answer to the question in the headline is absolutely, without a doubt, yes.

This story begins with a Minnesotan named Leo Shull, who moved to New York in the 1930s to become a playwright. He never wrote anything of note for the stage, but he wrote plenty about the stage, various guides to playwriting, “how to break into showbiz” style books, and eventually, directories of entertainment contacts.

In 1941, Shull rented out some mimeograph machines in a basement below a Walgreens at 44th and Broadway to produce a newspaper called the Actors Cue, a daily guide to auditions, agents and producers. (Actor’s Cue was similar to today’s Back Stage. That currently operating publication was spun off by two former employees of Shull in 1960.)

But this was no ordinary Walgreens. According to author John U. Bacon, this was the very first Walgreens in New York, in the basement of the grand Paramount Building.

It opened in 1927, the same year that Sardi’s Restaurant opened its current location just around the corner. Both were associated with the theater business, with show folk. In fact, this Walgreens was often called the ‘poor man’s Sardi’s’. There was even a wall of caricatures, just like Sardi’s, lampooning the most famous faces of Broadway.

In his biography, Eli Wallach called that particular Walgreens a “hangout for actors,” a place for out-of-work actors to spend their last dime on a sandwich at the lunch counter, wiling away time before an audition.

So then, obviously, it made sense for Shull to create his daily directory here. And he not only sold the paper to actors; he often hired them to spread out around the theater district and sell the newspaper on the street.

So who should walk in but an attractive young actress named Betty Joan Perske. She was born in the Bronx and currently lived on a ground-floor apartment in the West Village, making ends meet by modeling and ushering in Broadway theaters. But she hoped to soon be on the stage, not in the aisles.

At some point, she met Shull and began selling his newspaper on her lunch breaks. In her own words:

I spent most of my lunch hours rushing to Walgreen’s to grab Actor’s Cue and look for a job in the theatre. …….  Leo had a table in the basement of Walgreen’s where copies of Actor’s Cue were piled up and sold for ten cents apiece. I prevailed on him to let me sell some. He finally said okay — to get me off his back, I think. 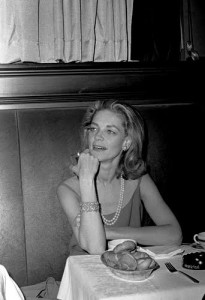 She took her papers to the sidewalk outside Sardi’s, where powerful producers and agents frequently dined. From there, she hocked the paper, not to make money, but to initiate conversations. “I kept my eyes peeled for a recognizable producer, actor, anyone who might help me get a job.” At right: Bacall, actually in Sardi’s Restaurant, courtesy Life Magazine

Her gumption eventually paid off. In 1942, with a slight name change (to Betty Bacall), she made her Broadway debut in the short-lived “novelty melodrama” Johnny 2 X 4 at the Longacre Theatre.  However, her fame would be made on the movie screen, cast in 1943 (after yet another name change, to Lauren) opposite her future husband Humphrey Bogart in the Howard Hawks’ classic To Have And Have Not. She never needed an Actor’s Cue ever again.

I wonder if Winchell, a regular at Sardi’s, remembered that when he wrote an entire column that year called “The Bacall of the Wild,” raving about the young starlet.

Actor’s Cue is still being sold today — presumably not in front of Sardi’s — under its more descriptive new name of Show Business.

2 replies on “Was Lauren Bacall the world’s most glamorous newsie?”