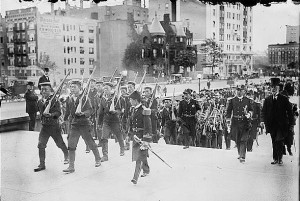 Workers at the Hudson waterfront awoke on September 11, 1911, to catch quite a curious sight in the water that day. It wasn’t the size of the ship that struck gathering crowds or its loud, rumbling engines; after all, the Chelsea piers hosted the largest ships in the world, and military vessels frequently traveled up and down the harbor. But this exotic, 4,300 ton cruiser was from a world away — the Hai Chi (or ‘Flag of the Sea’) from China, the first ever to enter American waters.

As the vessel sailed into harbor, greeted with cannon salutes from Fort Wadsworth and Fort William on Governor’s Island, New Yorkers were most captivated by the bright yellow flag held aloft by the breeze, emblazoned with a “huge blue dragon, with big black eyes, a flaming red tongue and white claws a foot long,” according the New York Times. 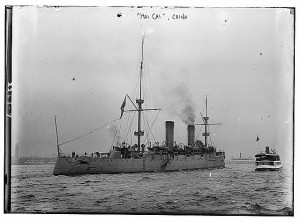 Docking nearby the Soldiers’ and Sailors’ Monument at 89th Street in Riverside Park, Chinese naval officers met with city officials, as well as 150 Chinese New Yorkers and “a lusty-lunged contingent” of the Chinese Boy Scouts of America.

This dignified ceremony contrasts with American view of the Chinese during 1911. The Chinese Exclusion Act was well in effect, barring immigrants from China from entering the United States. Most New York Chinese residents moved here from the West, where they had worked just a generation before, building America’s vast networks of railroads and Southwestern towns. And most were men; in 1911, there were perhaps no more than 500 Asian women living in New York.

The Chinese officers remained in New York for several days, finding entertainment and even meeting with Mayor William Jay Gaynor. The New York Times article specifically mentions that the Exclusion Act restrictions were ‘waived’ for the benefit of the Hai Chi officers.