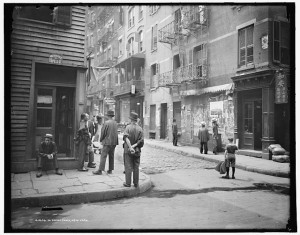 Casual posing at the opening of Doyers Street, circa 1900. (LOC)

I’m so relieved that we finally got to cover a proper New York neighborhood on the podcast. Since reviewing the historic shifts and events of a neighborhood are better covered topically, we hope there wasn’t too much confusion regarding the chronology. Manhattan’s Chinatown was a point of curiosity by the 1870s, but it wasn’t until after the Exclusion Act in 1882 that the community really became a force in the Five Points neighborhood and a destination for some of New York’s better known vices.

We pretty much hammer home that late 19th century Chinatown was a veritable ‘bachelor’s society’ with few Chinese women. But that does not mean there were no Chinese women. Or for that matter, children, as evidenced in this photograph from 1913. [source]

The caption reads, “Sunday school after a visit to Chatham Square, showing Chinese children lined up by size.” I’m fairly confident this was taken at the Mariner’s Temple at Henry Street. 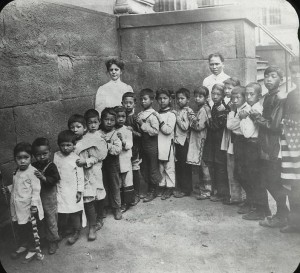 Pronunciation Proclamation: I’m a New Yawker by way of the Ozarks, so clearly my tongue had a challenge properly pronouncing many early Chinese names. (And Tom had a cold, adding to his difficulty.) Still, I think we did a pretty good job. For certain, I mispronounced Yung Sun Restaurant, the base of operations of one Sister Ping, when I said it the first time, but got it right the second.

For More Information: Speaking of Sister Ping, the best book on modern Manhattan Chinatown history is easily Patrick Radden Keefe‘s “The Snakehead: An Epic Tale of the Chinatown Underworld and the American Dream.” It is a must-read for anybody interested modern New York organized crime.

A perfect summation of late 19th century Chinatown can be found in Tyler Anbinder‘s ‘Five Points’. There are many great books on the early American Chinese experience, the friendliest to read being ‘American Chinatown’ by Bonnie Tsui.

Of our older podcasts, this show would be greatly complemented with a visit to our two most popular podcasts ever: Five Points: Wicked Slum and Five Points: The Fate Of Five Points. If you haven’t listened to them, I recommend downloading the ‘illustrated versions’ of each of these shows, featuring pictures of the things being discussed that pop up on your listening device. You download on iTunes or straight from here and here.

Below: What wares await you at Quong Yee Wo and Co., at 36-38 Doyers Street, corner of Pell Street? [courtesy Library of Congress] 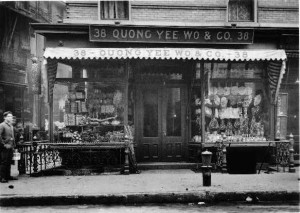